Spend Your Foreign Currency and Help the World Economy

After the American Century
Times are bad, so it is time to use all the resources that consumers have at their fingertips. According to a Danish news story, the average home here has about $250 in foreign currency lying around. Rather than exchange euros, dollars, and other money back into Danish kroner, people just hang on to it until they travel again. In good times, this might not seem important. But imagine the economic effect if all this money were spent right now?
Assume that the c. 100 million American homes have just $50 each in foreign currency in their desks and piggy banks. If they could be convinced to spend it all, this would suddenly pump 5 billion dollars into the economy. The government could encourage this to happen. Exhortation might not be enough, but what if banks were given an incentive to reduce their profit-making on exchange rates (into dollars, not out of dollars to other currencies) for a period of just one month. Through that window of opportunity, billions of dollars could pour into the economy.
This idea would strengthen the dollar, at least for a short while, and it would stimulate the economy. After that, we can have a worldwide search for money forgotten in old clothing or under the sofa cushions.
Posted by David E. Nye at 3:59 PM

Should Greece Exit the Euro?


Some time ago in this space I suggested that giving money to the Greeks would not solve their problems, and that it was better to let them go bankrupt if they could not reform. Now leading German thinkers have reached the same conclusion, as reported today in the New York Times.  It took them a while, and the Germans pumped billions of dollars into Greece while thinking about it.  Now some are suggesting that perhaps Greece should exit the Euro, and in effect go through bankruptcy, and then come back in when its house is in order. There is no mechanism for throwing a country out of the EU, so this would have to be a "voluntary" departure.

It would have made far more sense to refuse a bail out in the early spring. To refuse now has a different meaning than it would have then. In August a refusal says not only that the Greeks must pay their own way, but that their problems are too big for the rest of the EU. Stopping all support for Greece now looks rather like a team of fire fighters leaving a blaze that is out of control because they cannot put it out. If the fire brigade is inadequate to save Greece, what good will it be when a larger economy such as Spain or Italy gets into trouble? The EU begins to look weak, and its currency unreliable.

In short, once the EU has gone this far to save Greece, it rather must find a way to succeed. Recently, I suggested in jest that perhaps Greece could lease some of its islands to other countries for 99 years. This idea begins to look almost serious. 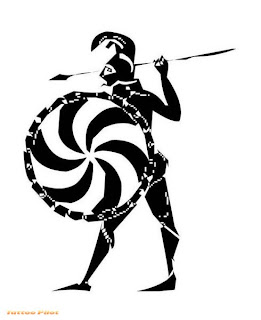 Declining US Power: Standard and Poor Downgrades US Government Debt

The decision is a milestone on the road to decline. Standard and Poor has decided that US government debt is no longer worthy of the highest trust. It has only been downgraded slightly, but the meaning of this event is huge. The US dollar and more specjfically US government debt has been the definition of the safest place to put your money since c. 1941. No longer. A canny investor today would want to spread the risk a bit, and also would expect to be paid a bit higher interest for investing in US government securities. The AAA rating that the US has lost is retained by Germany, Norway, Denmark, Sweden, and the UK, so these currencies will be strengthened -- something that is good but not entirely a benefit, as it hurts their exports.

The American taxpayer suddenly has a much higher debt to pay back, as the interest rate will now rise accordingly. It will cost billions of dollars that might have been used to jump-start the economy or build green energy systems. The long free ride is over. The US taxpayer will have to learn, and then have to teach the Republican Party, that a nation must pay its debts. It has to look credit-worthy. It has to have a credible tax code that generates enough income to pay the bills.

Sadly, I predict that things will get worse before they get better. I fear that instead of raising enough revenue and/or cutting enough programs to be credible, the Democrats and Republicans will wrangle and point fingers and carry their discussions into the 2012 political campaign. If they do so, the credibility of US government securities will continue to decline.

Meanwhile, China has a huge surplus in trade and no such problems. The shift of global power is evident.
Posted by David E. Nye at 7:22 PM

I did not plan it, but my short summer vacation was made even more pleasant by the reading I happened to do while on trains and planes and in idle moments when not walking around or eating in France. This was the first time I took along an entire library, via an Ipad and also a Kindle, so I did not have to doggedly plow through books that I had brought along, but rather could browse and select what suited my fancy. I ended up reading three quite different books, two of them about travel in the nineteenth century, and all set in places distant from both home and the part of France near Switzerland where we spent most of our time.

I had no intention of reading Agatha Christie, but one of her books was in the Ipad -- The Mysterious Affair at Styles -- and it turned out to be one of the early Poirot stories, quite enjoyable on two levels: as a puzzle (who did it and why?) and as a period piece whose language was redolent of another world of manners and conversation irretrievably lost. This was quite distinctly a journey in time as much as it was a whodunit, and I enjoyed it far more than I would have expected.

Henry James wrote a short work in 1879, "A Bundle of Letters," which amused me in quite a different way. As the title indicates, it consists of a series of letters. Several different people, all of whom are staying at the same high-class boarding house in Paris, write home. Each has disparaging remarks to make about the others, but indicates preference for someone as well. There are two American young women, a young American man, an impecunious Frenchman, an Englishman and his sister, and a German who is surprised and disappointed, even irritated, that the French seem scarcely upset by the recent war in which Prussia soundly defeated the French armies and laid a successful siege to Paris.

The two American young ladies do not get along, the English do not much like the Americans (whoseverely disapprove of inherited titles and the class system). The Frenchman gives language lessons to them all and preys upon the young ladies in his spare time, and so on. The American from Boston proves to be a ludicrous aesthete whose feet barely touch the ground. The German feels superior to all, certain his nation must triumph over such effete cultures as the others represent. Humorous stuff, but not fully worked up into a novel as it might have been. Instead, the potentially complex situation simply ends when the young American woman whose letter initiated the story decides to move on to another country. When a graduate student, I would have analyzed it as an early example Jamesian experimentation with point-of-view, and the abandonment of an omniscient narrator. But on this trip the fascination for me was how each person was defining themselves against other nationalities. Each thereby became both a voice and the "other" for several other people. To read the story with any thought forces a reader to ponder not so much national differences (as the characters do) but the process of self-definition through opposition.

Finally, I read a good bit of Henry David Thoreau's The Maine Woods, which I did read once before, but long ago. Thoreau studied the landscape from a birch-bark canoe and botanized as he went. He was also fascinated by the Native American guide, reporting carefully his dress, opinions, behavior, and admirable knowledge of the region they were passing through. My trip was not long enough to complete his journey, too, so I left Thoreau slapping at mosquitoes in a bog. He seemed happy there. Some day I may get back and get him out of woods into civilization, but then again I may just leave him there. It was 160 years ago and by now he is used to it.

This reading was not only enjoyable, but it helped me forget the tiresome administrative work I did for the last year, the book that I must rewrite by January, and much else I have now managed to repress, at least temporarily. These readings, each in a different way, offered a displacement. The first and most potent escape, or displacement, was that of going where I had not been before. But in moments of idleness, how useful and pleasant to keep the work world at bay by the simple device of reading about distant places and times. It was not a plan, but it surely worked better than the reading I did in guidebooks and histories of the places I was passing through. Such things tend not to be well written, and they usually repeat one another. As James once complained, tourist information assimilated before arrival will "annihilate surprise." Read the guide afterword, to see if you agree, not beforehand. Killing the immediate future by reading guide books is likely to push one back into the very past that one is trying to take a break from. Better to have both the surprise of novels and travel narratives, as well as the surprise of new places, freshly seen.