The Energy Transition from Gas to Electricity

American Illuminations: The Energy Transition from Gas to Electricity 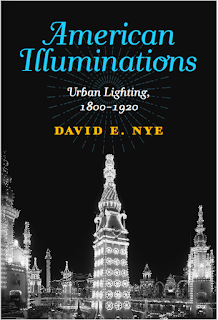 In 1900 the city of Cincinnati sent a small group around to ten other cities to study their lighting systems. Cincinnati had an old gas system and wanted to upgrade it. It may seem strange to us today, but it was by no means obvious that they should choose electricity. Gas lighting had improved greatly in the 1890s, and when the Cincinnati committee got to St. Louis they were told that while electricity was popular with the citizens, it was rather expensive and was only used on a few streets. Elsewhere, St. Louis was going to use Welsbach gas mantles. The committee next went to Indianapolis, but its system was not cutting edge and left immediately for Chicago, where they heard that of course the city was converting everything to electricity. But in Milwaukee, they learned that gas was preferred.

And so it went. The choices were also more complex than just gas or electricity, for there were many different kinds of arc lights, some open, others enclosed, some using alternating current and others direct current. The committee also had the problem that they wanted to compare systems side by side, but they were hundreds of miles apart. How could they compare the electrical system in Pittsburgh with the gas system in St. Louis? They might see one city when the moon was shining and another when it was raining. The problem is much like that of a city buying a technical system today, and it is not always clear which system is the optimal choice.

This is just one of many stories in American Illuminations which looks at how Americans developed the most brightly lighted cities in the world by the end of the nineteenth century. The larger story includes the spectacular displays at world's fairs, the development of "moonlight towers" and electric signs, the illumination of skyscrapers, the invention of the city skyline, the lighting of amusement parks, the city beautiful movement, and the many uses of electric lighting in parades and politics, particularly presidential inaugurations.

Walter Benjamin once wrote that "overabundance of light produces multiple blindings." Read this book, and see if you agree.


We are living in the midst of an energy transition, shifting away from fossil fuels to solar, wind, biomass, and other forms of alternative energy. The price of solar power has been dropping rapidly during the last five years, and is now a cheaper source of electricity than windmills and more importantly, cheaper than coal. The price differences will become even larger, as new R&D keeps finding greater efficiencies, and manufacturers achieve economies of scale in production. 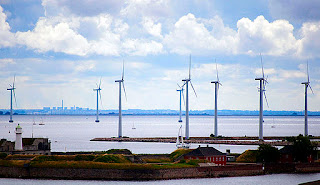 The energy transition is taking place most rapidly not in the nations that were dominant in the old oil-coal-gas energy regime, such as the United States, but rather in nations which do not possess many fossil fuel resources but do have lots of sun, wind, or thermal heat.  Chile, for example, has all three of these, and will soon be supplying most of its energy needs from windmills along its long coastline and solar installations in the large desert region in the north. When I visited Chile last year to attend a conference on energy transitions, I heard many people talk about the vast exports of energy that were possible, too, once high tension lines reached into other South American countries.  Iceland is a leader in thermal heating and thermal electricity, and sunny Portugal is also rapidly becoming a player in alternative energy.

Old fossil fuel economies are not as quick to change, and they are behaving in quite different ways. Germany has invested heavily in solar and wind power, creating thousands of jobs, and its official policy is to close nuclear plants and get rid of fossil fuels as soon as possible. Britain seems unable to give up nuclear power as a fantasy solution, but meanwhile is muddling through and headed toward more alternative energies, though not with the same pace and determination as Germany. France has long invested heavily in atomic reactors, and of all the nations in the world, has the greatest dependence on them.

The United States is divided, on this as on everything else these days. Some states, notably California, Massachusetts, and New York, are acting like Europeans, becoming more energy efficient, while investing in alternative power. In contrast, the Deep South until quite recently has invested almost nothing in alternative energies, and uses about twice as much energy per capita as the three states just mentioned. The Federal government is rather schizophrenic, with programs from the Obama years designed to increase energy efficiency and move toward wind and solar power, but run by Trump appointees who are undercutting the programs. Meanwhile, Trump is a strong supporter of the fossil fuel industries, particularly coal. One hopes he will be the last such president, for the long term health of the American economy depends on making the transition quickly, rather than lagging behind. Interestingly, some "red"states in the western US that usually vote Republican are nevertheless rapidly adopting wind mills, because their region happens to have steady, strong wind. This is in contrast to the American South, while has good sun but little wind except for that blasts of hot air coming from its politicians.

China is investing heavily in alternative power systems, and more recently India has begun to cancel plans to build new fossil fuel electrical plants, choosing alternative energies instead. The change is driven by falling costs at least as much as by environmental idealism.


How long will this take? Based on previous energy transitions, which I have studied, the shift in energy regimes takes at least 30 years, normally. But in the past the changes were driven by prices and the comparative versatility and convenience of different sources of power. For example, in factories steam power was not as flexible as electrical power. On the other hand, in 1910 gasoline engines were more convenient on the whole that electric motors to power automobiles, because batteries were not good enough. That problem seems to be all but solved, now, but it took more than a century.  How long will the transition as a whole take? Perhaps only a decade or two more in countries that are really trying to make the change, like Portugal and Chile. Sadly, the US, once a leader in the transition to fossil fuels and again a leader in electrification, is falling behind. The Republican Party is largely responsible, but the Democrats also share some of the blame. US energy policy has been a battlefield for decades.

The big question is whether in the world as a whole the transition will come quickly enough to overcome the destructive effects of global warming. Since the current US government has adopted the policy of denying the reality of climate change, our hopes will have to rest with the US state governments, thoughtful corporations that shift to energy efficiency and alternative energies (such as Apple), and most importantly, other nations. In this particular area, we do seem to be living "after the American century."

For anyone interested, I wrote about the earlier energy transition from gas to electricity as the source of lighting in a book that is about to be published, American Illuminations  MIT Press, 2018.