Merry Christmas, after all

After the American Century
There is, objectively speaking, not so much to be merry about. The weather here in Denmark has been unrelentingly cold and the snow has blocked roads and even made it hard for me to get out of my own street. The Danish government promises endless cutbacks, and makes ill considered reforms. And my mother in law is here for six days, pretending that she is not smoking cigars in the basement, wearing suffocating perfume, and insisting on hearing elevator music on the radio.


Nevertheless, there are reasons to be happy, even if merry is a bit over the top. The US and Russia are reducing their nuclear arsenals. The German and US economies are reviving, and the Chinese and Indians never really faltered in the first place. The Danish stock market went up a whopping 35% in the last year, wiping out the losses of the previous year.
And on a professional level, I have enjoyed teaching this fall, been invited to more places to lecture than I could accept, and managed to steer a new BA curriculum through four stages of a six stage process needed to get it approved. I have seldom written much here about my personal life - it isn't that sort of column - but I will say that things are good there, too.
So, on the whole, I can say Merry Christmas, too, and hope that 2011 will be an improvement.
Posted by David E. Nye at 1:29 PM

The 2009 PISA results can be seen in the table accompanying this article. (For the 2012 results, click here ) Both Europe and the United States must do a better job educating their children if they are to keep up with Asia. On the reading test European countries were not so far apart, and ranged from a low of 483 (Greece and Slovenia) to a high of 508 (Netherlands). That is only a 25 point spread. But the difference between the Netherlands and Shanghai was 48 points, almost twice as much. Well, actually Finland did get 536, far and away the best showing for Europe. The pattern was the same in Science and in Math, where China was by far the best, while the Europeans clustered well behind. The United States was mediocre in all three categories.

Sadly, education budgets are being cut in many European countries, which are not investing in new schools or more teachers. Indeed, Denmark has just decided to let the size of classes in elementary school get larger, a serious mistake. Larger classes tend to be harder to keep focused, and they demand far more of teachers, who can scarcely give individual attention to students who need extra help or those who need extra stimuli. 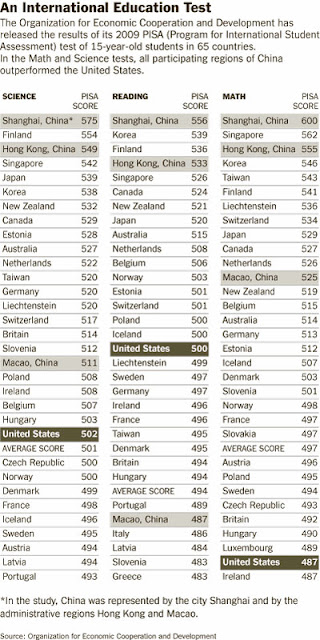 If you take the three test scores and add them together, this is the result (not all nations surveyed are included in this list).


If the future belongs to the best educated, then the future belongs to Asia, Canada, New Zealand, Australia, the Netherlands, and Switzerland. Judging by this list, being a wealthy country helps, but it is not the determining factor. Norway has no national debt and a huge public surplus, yet achieved only average results, while Finland, which has less money per capita than Denmark or Norway, was at the top. And the United States, which for decades was the wealthiest large nation in the world, scores below the average.