[We now know that Romeny has picked Paul Ryan to be his running mate, but this piece reminds us of the other alternatives he had, two of which could have helped him with women voters.]

Who will be Romney's running mate?  A common option, historically speaking, is to select one of the other candidates. This conceivably could happen, though I strongly doubt it because there were no women, no minorities, and no one even remotely young.Then there was all that negative advertising, souring relations. Therefore, I am going to assume that other candidates in the primary are out, and that shopping for a Republican VP is a matter of looking at governors and members of Congress. Here are some people that might get considered.

So many have mentioned Mitch Daniels, Governor of Indiana and New Jersey Governor Chris Christie that I will just let their names stand, and anyone interested can find out more elsewhere. But I am guessing that Romney will look for someone a little unexpected, younger, and less typically Republican, i.e. a woman or a member of a minority group.

He could get both at once by picking Rikki Haley, Governor of South Carolina. She is young, only 39, and got into office with strong support from the Tea Party. She is from the South, which balances Romney's frigid Northern-ness. She has an Indian immigrant background, which would dispel the Romney Harvard old-boy image quite a bit. Since one effect of the primaries so far has been to alienate many women from the Republicans, this choice would help Romney win back female voters. Remember that without women voters Clinton and Obama would never have been elected. Had only men been voting, the Republicans would have held the presidency without a break since at least 1980.

Then again, perhaps a young Latino is Romney's missing ingredient. In that case, the most exciting option might be Mark Rubio, Senator from Florida. He is of Cuban-American background, and one of the up-and-coming generation. This choice would also reach out to the Latino voters who have not been much drawn to the Republicans in recent elections. If nothing else, Rubio could deliver the largest swing state to the Romney column, freeing him to focus his campaign on other swing states. Rubio is a good public speaker, and will be a potential candidate for some time to come. He has just endorsed Romney.

Yet another young face is New Mexico governor Susana Martinez, born in 1959. She is tough on crime and would appeal strongly to the Hispanics of Mexican background. Note, however, that New Mexico is a far less important swing state than Florida or Ohio, and she is not as well known as Rubio.

But thinking of swing states, Ohio Senator Rob Portman (below) might be just the man to deliver his state to the Romney camp. Portman, born in 1955, is a former White House budget chief under Bush II. However, I am guessing that two white men from Northern states, both focused on economics, is not the ideal team for the Republicans. To maximize the impact of their VP candidate, they need to show some sympathy with the Tea Party and/or the evangelicals and to show a more multicultural and youthful face.

These are four possibilities that each have something to offer the Romney campaign. For that matter three of them (but not Portman) would help Santorum, another white man from a Northern state, if he should manage to become the nominee. In the  unlikely event that Gingrich becomes the candidate, then a different slate of possible VPs would be needed.

Nevertheless, predicting the VP is generally a hopeless task. Who could have imagined that the first Bush would choose the maladroit Dan Quale? Or that Nixon would pick the obscure Spiro Agnew? Or that Obama would pick Joe Biden, for that matter.

These and other candidates considered likely possibilities have been discussed in the New York Times, whose list did not include any women.

Election 2012: Does Bishop Romney Have a Positive Message, or only a Negative Ad Campaign?

After a decisive victory in Illinois, Romney appears close to winning the Republican nomination. Notably, Gingrich's candidacy faded to fourth place, just behind Ron Paul. This leaves Santorum as his only real challenger, and Romney beat him by more than 10 percentage points.

One can spin this somewhat differently, and point out that Romney still did not manage to get half the votes in Illinois. This means that despite outspending all of his rivals -- by a wide margin -- the Republicans as a group gave more votes to others than they did to him. There clearly remains a high level of dissatisfaction with him as a candidate.

But the mathematics of delegate counts suggests that after winning Puerto Rico and Illinois, he will be hard to stop. In terms of pledged delegates, Bishop Romney has more votes than his three rivals combined.

(In case anyone wonders why I refer to him as Bishop, it is because Romney is a Bishop in the Mormon Church, and gives 10% of his income each year to it. This tithe, as well as his missionary work in France for the Mormon Church, shows that he is not a casual member of that church. He has also participated in posthumous baptism, a Mormon ritual  in which people who were never Mormons during their lives are "converted" post-facto. Among these are many of the founding fathers of the US and Anne Frank, who as a Jewish person was killed by the Nazis.)

The problem, increasingly for Bishop Romney will be one of turning his almost entirely negative campaign into a more positive one telling Americans how he can make the country a better place. To date, he has used all his energy to attack others, including the President. His advertising money has been overwhelmingly used to send out negative messages. By one count he has had seven negative advertisements for every positve one. It seems doubtful that this strategy alone will put him in the White House.

So as Romney moves to later primaries, it will be interesting to see if he has anything equivalent to Ronald Reagan's famous "Morning in America" campaign. What is he for? This is also a challenge for the Republican Party as a whole, which for four years has been a negative force, constantly on the attack, but almost never offering anything new or innovative as a solution to the nation's challenges.

In short, the question now becomes whether Bishop Romney's candidacy can renew the Republican Party, or whether it will remain mired in squabbles between its various factions. Can it articulate a common vision and look forward? Can the Republicans think positively? And will Bishop Romney's religion play a role in whatever does happen?

Election 2012: What Do Alabama Exit Polls Tell Us about the Republicans?

No one really "won" in Alabama. Rather, three candidates split the vote into almost equal segments, with Ron Paul getting only 5 percent. But exit polls also tell us more about how the electorate is divided. Alabama is more interesting than Mississippi here, because the latter is so rural and so poor that it is an extreme case.

So, here are the conclusions one can draw from exit polls. First of all, there are virtually no Black people in the Alabama version of the Republican Party, being less than 2% of the primary voters there, or about 4,000 people. Perhaps these are Black Mormons or Black millionaires? No less than 93% of the Republican voters were white, and of the three main candidates Romney finished last with just 28%.

In terms of gender, Gingrich is the most popular among men (34%), especially those who have never gone to college. Apparently, they are the most impressed by his repeated claims to be the smartest candidate. He was strongest in the suburbs, with 35% there, and fully 40% think he is the candidate best able to deal with an international crisis.  Otherwise, in most categories Gingrich comes in second or third.

Romney is not particularly liked by the intensely religious, the rural, the young, men, or women.  The only groups where his attraction rises to above 35% are those over 65 and those who make more than $100,000 a year. The logic seems to be that Romney would win a massive victory among rich, dead people, as, like him, they do not drink and are pretty rigid.  This constituency has little gender left and are almost all over 65. Given Mormon theology, in which the dead can be posthumously made a member of the church, this would seem an incontrovertible result.

Romney also got 35% of the voters who had studied beyond the BA level. He is clearly understood, even by the Republicans, to be aloof from  ordinary people. Only one in five voters thought Romney best understood the average American's problems. Why is he getting about a third of the support, then? Two factors keep Romney viable in this race. (1) Not less than 59% of the Republican voters perceive the economy as the most important issue (compared to 25% who think it is the federal budget deficit, the 9% who think abortion is, or the 3% who say it is illegal immigration). Romney is generally thought to be the man who can deal with the economy.  (2) Romney is also perceived as the man who can most likely defeat Obama.

There are some curiosities that may not apply elsewhere. For example, it seems surprising that Romney only polled 28% among the Independent voters,  while 33% of them voted for Santorum. To be an "Independent" in Alabama apparently often means that one is further to the Right than the Republican Party, as Ron Paul did twice as well with them (11%) as he did overall. Overall, in Alabama 72% of the Independent voters voted for Gingrich, Santorum, and Paul. This is in contrast to most of the nation, where Independents tend to be moderate, centrist voters.

37% of the Alabama voters made up their minds in the last days before the election, and Romney narrowly won among this thoughtful group who realized that the choice was difficult because quality is missing. In contrast, Santorum won among those who made up their minds during the last few weeks (when he began to surge), while Gingrich won among those who decided long ago. In other words, Romney's heavy spending and massive negative advertising did sway some of the undecided voters during the last days of the campaign. Nevertheless, as predicted several days ago, he was never going to do well in these Southern primaries.
Posted by David E. Nye at 8:57 AM

A Visit to BMW Welt, Munich

As part of the research for my forthcoming book on the assembly line (MIT Press, 2013), I have visited several factories. Here is my account of a visit to one of them. 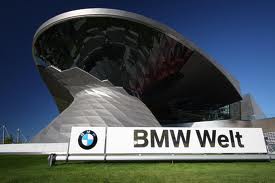