NSA Violations Undermine the US Abroad: Is this Obama's Legacy? 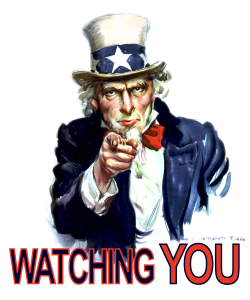 This is the 400th blog entry for After the American Century.

More revelations about the NSA's snooping are being discussed in the world press, and it is increasingly clear that the NSA has undermined US relations with allies. How much distrust it has created cannot be quantified, but every Danish person I have discussed this with dislikes what the NSA is doing, including colleagues, teenagers, pensioners, students, neighbors, and taxi drivers. All can see that some spying is needed for national security, but hoovering up all the data available seems not just expensive, not just overkill, not just excessive, but the actions of a rather paranoid international bully.  Sorry, my American readers, but this is the bad news the domestic press is not saying too much about.

Because the underlying reputation of the United States in the world has been adversely affected, news is beginning to appear about American businesses losing contracts abroad because of fears of NSA surveillance, fears that trade secrets are being stolen, fears that negotiations and bidding on lucrative contracts are being spied on, and so on. Many foreign businesses want to avoid saving data on US systems, because of these fears. Some estimates suggest that the IT industry alone may lose $180 billion in foreign business because of the NSA revelations. Little wonder that the largest technology companies wrote an open letter to President Obama protesting the NSA's over-reach.

Likewise, many ordinary people abroad wish they could stop using American-owned sites, such as Google, Facebook, Twitter, and all the rest, because the newspapers have confirmed that all these corporations are compromised. In the end, it matters little whether they intentionally shared date with the NSA or were hacked by the NSA. The lack of privacy is more than disturbing; it is driving a wedge of distrust between the US and the rest of the world.

The average person assumes that if the German Prime Minister is not safe from NSA snooping, if the Israeli Defense Minister is not safe, if the diplomats of the EU are not safe, then of course no one else is safe either. The assurances that  information gathered is not shared with other government agencies rings rather hollow. After all, Mr. Snowdon was able to obtain huge amounts of information about all sorts of things. There appear to be thousands of others with the same security clearance. Have none of these men and women ties to other US government agencies? Are all of them able to resist pressure to help out a friend in another government agency? Are none of them corrupt? Who can seriously believe that the federal access to information is limited to NSA?

Unhappily, this ongoing scandal may become what President Obama is remembered for. On the one hand, he spent hundreds of billions on a global paranoia project to gather more information on more people than ever before in history. On the other hand, he did not allocate sufficient funds or find sufficient expertise to put Obamacare into working order. This is bad leadership.

The conclusion I reached in June still seems valid. Then I wrote that "The problems of the Obama Administration are to a considerable degree of its own making. Presidential second terms are often difficult, and this one seems to be no exception. Think of Lyndon Johnson after his re-election, when antiwar protests dogged his every step. Think of Richard Nixon's second term, engulfed by Watergate. Think of Reagan's second term, and Irangate. Think of Bill Clinton's scandal-ridden second term and the attempted impeachment. And finally, think of George W. Bush's second term, when his approval ratings sank below 25%. Since 1963, not one  president found a way to escape controversy and unpopularity in a second term. Obama unfortunately seems headed toward a similar fate." President Obama's popularity rating has sunk by more than ten points since this time last year. Recent second-term presidents have often had ratings around 50% at the end of their fifth year. Obama's rating is 43% according to CBS, but only 40% according to Gallup.

What an irony it will be if the American economic recovery is compromised by the NSA and Obama's slow correction of its excesses. How ironic that a president who began his term with tremendous good will abroad has squandered it.


The sad spectacle seems to justify the title of this Blog itself. The American Century perhaps could be dated from 1918, when the US emerged from World War I as the wealthiest power, with the world's largest industrial plant. The US reached the apogee of its economic power in the early Cold War, but its hegemonic position has gradually eroded as a percentage of the world's economy since then. To some extent this was unavoidable, as other nations industrialized and digitized. But there is also a purely internal decline into dysfunctionality that is not primarily due to external foes. No outside power eviscerated public education. No foreign government forced the US to have unworkable immigration laws. No international agency failed to monitor and control its banks. No nefarious outsiders are responsible for the foolish tax policies of the Bush years or the problems created by the "sequester." No outsiders force Americans to purchase ever more weapons for personal use. These egregious and unnecessary errors are just part of a catalog of mistakes that would drag down any nation, if persisted in long enough. The United States seems intent on undermining and defeating itself. The excesses of the NSA are part of that pattern.
Posted by David E. Nye at 12:37 PM