The Longterm Perils of Fracking


Fracking is much in the news. This new way of extracting oil and natural gas is controversial because, while it lowers energy prices and generates jobs, it has an environmental cost. If North Dakota is booming and crying out for more labor, deep beneath the surface of the state fracking is pumping chemicals into the bedrock.  No one knows with certainty how this may affect the ground water a generation from now. North Dakota is extracting oil using this method, while it is being used in Pennsylvania and New York to extract natural gas. 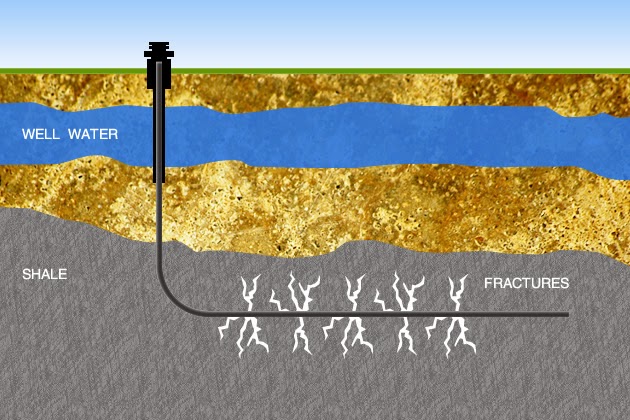 Regardless of where fracking is taking place, the public does not know what exactly is being injected into the ground, because industries regard this as a trade secret, and no legislation forces them to disclose what exactly they are doing to the land. However, some of these chemicals used in fracking are known, including hydrochloric acid, boric acid, sodium chloride, and ammonium chloride. Many of the chemicals are "biocides" that are intended to kill bacteria.  Others seek to change the ph of the water.

It may seem amazing, but the "Safe Drinking Water Act" has an exemption for hydraulic fracturing (or fracking). The act specifically does not control or regulate, "the underground injection of fluids or propping agents (other than diesel fuels) pursuant to hydraulic fracturing operations related to oil, gas, or geothermal production activities." (See the Environmental Protection Agency.) There are rumors that some oil and gas drillers are using nano-technologies whose environmental consequences are not known.

The long-term pollution of water is an obvious danger that is being downplayed in the rush for quick profits, but there is another danger that is less discussed. Fracking has given the oil and gas energy regime a new lease on life. Just five years ago one could argue that both national security and the danger of global warming pointed to the need for a rapid conversion to alternative energies. But in 2014 US oil and gas production is soaring to the point where the government is under pressure to allow the nation to become an oil exporter again. The falling cost of natural gas is making the US highly competitive in some industries, in contrast to Europe where gas prices are noticeably higher. In the short term, this stimulates the economy, but in the longer term it encourages Americans to remain high energy consumers, embracing an unsustainable style of life.

The current American oil and gas bonanza will delay, perhaps for an entire generation, the transition away from fossil fuels to sustainable homes, vehicles, and consumption levels. Leadership in the new technologies of wind, solar, and bio-fuels may continue to slip away from the US to foreign competitors. Germany, for example, has made a major commitment to becoming more energy efficient, even as it is abandoning nuclear power. The Danes have developed one of the world's largest and best windmill industries.The Chinese are investing heavily in solar energy and have out competed the US for foreign markets.

Fracking may be good for the American economy in the short run, but in the long run it cannot be very good for the land itself. Furthermore, it misdirects economic development toward an inefficient, high-energy dead end. It will not reduce the cost of oil, because that is shaped by world demand, which is rising rapidly. It will retard transition to a sustainable energy regime, and it may well undermine US competitiveness in the growing area of alternative energy technologies.

The United States is opting for a strategy of quick profits and "pollute now, pay later."  Most of the costs will be paid by later generations.
Posted by David E. Nye at 9:09 AM