Expatriation: not what it used to be


A century ago being an expatriate had a certain cachet. Some major American writers once lived primarily in Britain, notably Henry James and T. S. Elliot. In the 1920s a raft of famous authors resided in Paris, as chronicled in Malcolm Cowley's Exile's Return. Central works of American literature were written while the authors were living in Europe, and they often take place there as well, notably Ernest Hemingway's The Sun Also Rises or F. Scott Fitzgerald's Tender is the Night. A sojourn in Europe was once thought essential for every sculptor, painter, musician, and writer. The American artist abroad then lived well due to a strong dollar. In that era, the terms commonly used for such people included "emigrant," "émigré," "expatriate," and "exile." These did not usually have a negative connotation.

Today, the image of the foreigner who lives abroad is somewhat different. Many terms referring to them do not have positive connotations, including "illegal immigrant," "refugee," "alien," "deportee," "evacuee," "migrant," "foreign national," "itinerant," "displaced person," and "gypsy." The term "expatriate" is not much used, and I do not recall being called that by anyone, at least not recently. These days, the dollar is strong but not as strong as in 1920. 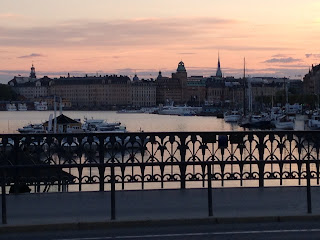 For many reasons it is getting more difficult to be an American expatriate (the older term) or foreign national. This is an unintended product of many factors, including greater mobility, the tightening of security in the face of terrorism, and the digitization of information. The long lines at airports are one obvious example, where on arrival the non-citizen must wait in the slower queue.

Banking offers a second example. The Economist writes that "Worried about being hit by massive fines for unwittingly aiding money-laundering, sanctions-evasion or financing terrorism, banks have over the past few years dropped customers in countries or sectors deemed high-risk." Even in countries where risks are low, it is now far more difficult to open a banking account. I know this from personal experience. When abroad for more than a few months, it used to be routine to open a local bank account. This has become more difficult, and one is forced to use ATMs and the bank in one's home country, with all the currency exchange charges that come with it. Yet a foreign account cannot deal with every contingency, as local services often are based on having a local bank and credit card. Digital payment systems, for example in the London tube system, do not always work with foreign accounts.

Pensions are a third example. Work in several counties during your lifetime, and each will give only a partial pension on retirement. Nor is there much logic to how much one receives. A nation where one worked only two years may pay half as much as another country where one worked more than 25 years. Saving privately can compensate for this problem, but saving for a pension in one country may not be accepted as a tax deduction in another. These matters vary from one nation to another, and generalization is impossible beyond the fact that sorting it out takes time. A lot of time.

A fourth example is taxation. A decade ago I was temporarily in Britain for a semester, and agreed to give a lecture in Norway. I made the mistake of accepting a modest honorarium for this work. As a result, the honorarium was taxed in Norway, in Denmark (my permanent residence), in the UK (my temporary residence), and in the US (my citizenship). Taken together, these taxes amounted to more than 100% of the honorarium. Perhaps there was a way to avoid paying so much. If so, the rules are hard to make out, and the time demanded to find and fill out various forms made it impractical to contest it.  Since then, I have been far less interested in being paid for lecturing abroad, unless it is in Denmark or the US, which limits the taxes to "just" two countries. Double taxation demands time and produces anxiety.

The difficulties of being an American expatriate have measurable consequences. An increasing number of long-term residents abroad are renouncing their US citizenship. I am not considering this option, but I know people who have turned in their passports. Fortune magazine noted that more people are giving up American citizenship, with a 26% increase in 2016 alone. That was before Donald Trump became president.

Both political parties have long ignored the plight of expatriates, and it was the Democrats who in 2010 passed tax laws for Americans abroad that are more draconian and punitive. As at the airports, the targets of this legislation were smugglers and terrorists, and the intentions were laudable.  The absolute numbers renouncing citizenship are still small, but the trend is troubling. The increase in the last decade has been more than 100%.

We are continually told that the world is becoming more international. Were Hemingway to return, he might disagree. At times seems to be more nationalistic and xenophobic.