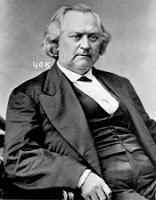 Whenever I get to Nevada I feel as though I ought to be given a free hotel room. After all, the first governor of the Nevada Territory, at the time of the Civil War, was James Nye (1815-1876. See the photo on the right). I admit he was a distant relative, but they did name a county after him (population 32,000), and he was the first senator elected to represent Nevada when it became a state. We have some rather friendly remarks about James Nye from the pen of Mark Twain, whose brother was the governor's secretary. Twain declared,
In any case, since my family has been associated with Nevada for almost 150 years, I have always taken a little extra interest in its affairs, including the caucuses going on there later today.
First of all, despite being a large western state, Nevada's 1.9 million people are mostly urban, with Las Vegas and vicinity concentrating 1.3 million of them, followed by Reno and nearby Carson City. As Las Vegas and Reno have grown, they have become more like other American cities. They have universities and high schools, supermarkets and malls, suburban housing areas, and all the other features you might find in Omaha or Denver. The majority of the land areas in these cities bears little resemblance to the glamorous "strip" of gigantic casinos that figure so prominently on CSI or in films.
A politician need not visit 95% of the state to reach the majority of voters, but can focus almost entirely on these two urban areas. The racial composition of this largely urban population is not much like that in New Hampshire or Iowa. One fifth of the entire population is Hispanic, and polls indicate they lean toward Clinton. Obama can expect strong support from the Black population, but they are less numerous (7%).
Economically speaking, Nevada is not like the rest of the country, or much of anywhere else, because its economy has such a large element of gambling and tourism. The gambling revenues are so large that the tax paid on them covers most of the state's expenses. There is no state income tax in Nevada. So it has been a liability for Obama that in the past he has been critical of gambling. I happen to think he was right to say that gambling was not a good thing for poor people, taken all around. In his words, it can have a "devastating effect" on communities. As a state senator in Illinois, Obama did not always want to see gambling spread to more and more places. But Las Vegas is not the ideal place for a politician to get known as a critic of gambling, even if we do know that gambling in effect is a regressive tax that hits the poor harder than the rich.
The Clinton campaign has kindly made a point of letting Nevada know Obama's views, while Hillary has posed for photographs with casino owners. She has stressed her support of their operations. Meanwhile, Obama has the endorsement of the casino and restaurant workers, which makes for an interesting contrast. Who would have thought that the Hillary of New Hampshire who identified herself with mill workers could so quickly become a buddy of the high rollers? For her, gambling apparently is just good economic development, and she has been endorsed by leading figures at MGM Mirage and Harrah's. Clinton's new position potentially could mean she will support on-line gambling, which has large implications for the election as a whole. Gambling is a hot issue in California, where there are several referendums about it. Furthermore, John McCain is not friendly to on-line betting and gambling. So, is Hillary really intent on widening the reach of gambling? Is this what "change" means to her? Or is she just willing to use anything to get an advantage against Obama in Nevada? She has already run into trouble with the Methodist Church. She claims to be a good Methodist, but apparently the church has somewhat stricter views on gambling than she does. One suspects she will return to the church fold soon, perhaps as soon as the voting is over. Tomorrow is Sunday, after all.
Meanwhile, I am still hoping to get that free hotel room, though perhaps I will have to go to bone dry Nye County to get it.
Posted by David E. Nye at 2:49 PM