How Moderate is McCain? 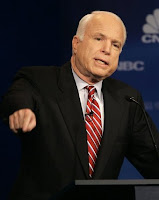 Writing on Super Tuesday before any votes have yet been cast, I shall say nothing about the exciting Democratic contest, except that Obama seems to have momentum, rising in the polls each day. He might surprise Hillary in California. But more about that tomorrow. Today it is time to think about the Republicans, who apparently will make John McCain their nominee. It may not happen in a formal sense on Super Tuesday, but all the polls suggest that his competition will fall so short that the race will effectively be over. Huckabee may win a state or two in the South, no more. Romney will apparently run second in many states, though he should win at least Massachusetts, his home state.

It is therefore time to look more closely at McCain, and ask what his positions are. Is he really a moderate? For my European readers, I should say that compared to the Scandinavian or German politicians, he is off the scale to the right on many issues. No one with his views would have a shadow of a chance of leading any of these nations.

The American media's image of McCain, however, is that he is a moderate compared to the other Republican candidates. He is also perceived as something of a maverick, unwilling to toe the party line. It is true that he has not been a knee-jerk supporter of Bush's foreign policy. He is not a Bible-thumping fundamentalist like Huckabee, and he does not quote the Book of Genesis on the campaign trail. He admits that climate change is real (though he argues that nuclear power is the remedy). And he has supported stem-cell research, along with that wild-eyed radical Nancy Reagan. But on most of the issues McCain is quite conservative. Consider the following examples.
Abortion. McCain consistently has called the Supreme Court decision that legalized avortion, Roe vs. Wade, a mistake. He said again in the California debate last week that he would appoint "strict constructionists" to the courts. In American political code, this means he wants judges to stay away from legislating from the bench, particularly on abortion. McCain considers the "right to life" to be a human rights issue, and he has voted consistently on this issue. For example, he supports punishing doctors who perform abortions.

Iraq. McCain wants to fight the war as long as it takes. As a Vietnam War veteran who was imprisoned by the North Vietnamese, he has strong feelings on this issue. He has said the United States should stay in Iraq for 100 years, if necessary. Note that McCain went to the Naval Academy for his education, as did his father, his grandfather, and his son. By comparison, Bush was not trained as an officer. He served briefly in the National Guard and never saw combat. McCain is a warrior by instinct. He is also reputed to have a fierce temper.

The Arts. McCain would eliminate Federal spending on the arts and humanities. This is a symbolic issue, as annual Federal arts funding is less than the Iraq War costs every single day.

Civil Rights. McCain wants to keep the Federal government out of rights issues and leave them to the states. The American Civil Liberties Union (ACLU) consistently has rated McCain as hostile to civil rights. In 2002, for example, McCain had the lowest possible score (0%) in their annual rating of candidates on civil rights issues. Nevertheless, at times his conservatism can lead him to vote with liberals on specific issues. On gay marriage, for example, he has voted against a federal ban, saying that imposing this from Washington is inconsistent with Republican principles.

Evolution. McCain would allow the decision about teaching "Creationism" to be made in each school district. No Federal imposition of the teaching of Darwin would be allowed.

Death Penalty. McCain supports the death penalty, and would have it extend to drug dealers. He would increase spending for Federal prisons.

Drugs. McCain strongly opposes any legalization of marijuana, which he sees as an addictive, "gateway drug" that leads to more powerful drugs.

Energy. McCain has voted against achieving energy independence, even though he rhetorically supports that idea. He has opposed putting research money into alternative fuels, and he has opposed federally supported development of ethanol as a partial substitute for oil. The Campaign for America's Future (CAF) rates law-makers' voting records on bills dealing with energy independence, and they give McCain only a 17% rating. That is quite low compared to Clinton and Obama, both of whom CAF rated at 100%.

McCain's positions are what passes for "moderate" in the Republican Party, which suggests how far to the right the other candidates are. On all of these issues, the Democratic Party has a different stance. Internal party differences between Obama and Clinton pale to insignificance by contrast.

In short, do not be deceived by the assiduously cultivated "marverick" image of John McCain. On most issues, he is not a moderate. Rather, he is much like the George Bush that has emerged during his second term. Bush too now admits that global warming is real and that the US is "addicted to oil," while doing little about either of these problems. He too wants to stay in Iraq, pack the Supreme Court with strict constructionists, keep the death penalty, encourage the Creationists, and discourage those pressing for Civil Rights. McCain does smile more, but he is a real warrior and a real conservative.

The interesting question becomes, will this conservative McCain become visible to the voting public by November, or will he still be perceived as a moderate maverick?