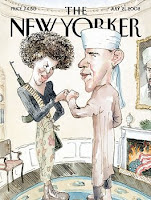 The New Yorker prides itself on being a bastion of the fine arts and good taste, and its covers are often a delight. So it comes as a surprise that the usually artful, often subtle, and almost never crude cover of that magazine now displays Barack Obama and his wife Michelle as Arab Revolutionaries in the Oval Office. Those who question the magazine's intent are told that this is a satire. Correction, it is racism masquerading as satire. I do not recall anything similar directed at any other presidential candidate. [Since posting this, I checked all the New Yorker covers from 1992, 1996, 2000, and 2004, and there is nothing even remotely like it for any of those presidential campaigns.]

Yes, I know, my comment makes it obvious that I am a humorless person who cannot appreciate a joke. But this is not a joke. For those who may have forgotten, during most of American history Black men have been told that they are humorous figures of fun. No caricature was too grotesque. Even after 1900 it was common to draw black men as awkward, thick-lipped cretins slobbering over watermelon. The New Yorker is too smart to revert to such well-known racist stereotypes. Instead, why not depict a Christian, Harvard-educated lawyer as an Arab revolutionary who admires Osama bin Laden? It is sooo funny -- too them apparently.

Well, how would The New Yorker like it if someone drew a picture of their editorial room and plastered it all over the world - a picture that drew on every negative association one could think of with regard to Jewish intellectuals, New York snobs, etc. etc. It would all be in good fun, of course, satire, get it?

Please. The next thing we will see New York's intellectuals demand that Obama show he can dance, because that is supposed to be part of being Black. Be funny and dance and act stupid, right out of the Minstrel Show tradition.

If this is what The New Yorker is up (or down) to, one can only imagine how foul this campaign may become and how low it may sink before it is over. In the meantime, the nation is facing a financial crisis in the housing sector, it is doing little to change its high-oil consumption habits, the budget is way out of balance, the dollar has sunk to new lows, and there is rampant corruption in the awarding of contracts to oil companies and other American firms in Iraq. Why, then, must this magazine foul the air with this stereotype of the leading contender for the presidency instead of some pointed criticism of the nation's real problems? That is where satire is needed. This is not humor but a fart in the face of the public.
Posted by David E. Nye at 5:57 PM