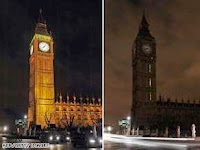 Across the world, in 88 countries, cities turned out their lights last night for one hour, starting at 20:30 local time. The Houses of Parliament and Big Ben, dark. The Eiffel Tower? Noir. The Chinese Olympic stadium, Sydney's harbor bridge and opera house, Atlanta's Coca Cola Building, dark. Toronto reduced its total electricity consumption by 15% during "Earth Hour," more than twice as much as last year. It may have been the biggest global demonstration in history.

In most of the participating 2800 cities and towns, the local newspapers and politicians were actively promoting Earth Hour. However, I looked in vain for anything about Earth Hour II in two Danish newspapers this morning. Last night, the City of Odense turned out its streetlights at 20:30, as we did at our house. Yet, as I walked around our neighborhood, few others seemed to have done so. Using the simple test of looking for lighted candles showing in windows, it appeared that most people had lots of light bulbs on, and that perhaps one in ten actively supported "Earth Hour." I hope I am estimating incorrectly, but in the last week I have not sensed any awareness of this event. Not a single student, colleague, or neighbor has mentioned Earth Hour to me, or showed any interest in it when I mentioned it. Not one journalist has called or written an email asking for my view of Earth Hour, from the viewpoint of an energy historian.

This morning, the local newspaper (Fyens Stiftstidende) has not written a single word about "Earth Hour" that I can find. The front page features a photograph of two girls eating ice cream. The three stories on page one are about increasing service charges on house loans, Conservative tactics for the next (hypothetical) election, and an extremely important piece on the development of a cardboard, biodegradable "Paradise coffin" for pets, available in five sizes. On the plus side, the same newspaper has five pages about energy-saving forms of electric lighting in its second section, without, however, mentioning Earth Hour anywhere that I can see.

Apparently, for all-too-many Danes, global warming is only an issue of concern for thousands of cities in other parts of the world. Judging by this event, you would never know that Denmark is hosting a major climate conference that will seek a replacement for the Kyoto Accords. Political parties paid lip service to the event, but except for a single concert in Copenhagen, the event was a non-event in Denmark. For 2009, the clear message from Denmark seems to be that hardly anyone cares very much about Earth Hour or about forging a world consensus to reduce global warming. To anyone familiar with the current government, this should come as no surprise. Maybe next year they will use their wall switches to vote for change, to proclaim the solidarity with others, and to send their politicians a message.