Iran and the Bomb

This week we all learned that Iran had been hiding a second nuclear development site. It was buried underground, and never shown to the inspectors whom the Iranians wanted to convince its intentions were purely the peaceful development of atomic power. It is exceedingly hard for anyone to believe that now.

Decades ago I visited Hiroshima, where I visited the museum devoted to the victims of the first atomic attack. One exhibit remains burned into my memory. It was a little girl's watch, and the hands had melted into the dial at precisely the time the bomb went off. She was on her way to school. Heat that powerful seared her flesh and boiled the blood in her arm. That little girl would have been about 75 today. 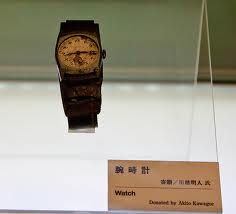 Atomic weapons have no place in this world, and should be done away with. Proliferation is not an acceptable option. Not only should Iran be convinced to give up their bomb, but the Israeli and Pakistani governments should do the same. Otherwise, the risk is that other Middle Eastern states will seek "parity" with Israel and Pakistan.

Both the Russians and the Americans have been scrapping their nuclear arsenals, bit by bit. With enough time and a bit of luck, the detailed engineering knowledge of how to make these terrible weapons could be forgotten, even if we cannot unlearn the physics that explains how nuclear fission can occur.

In the meantime, I think the Iranian people should all be sent a photograph of that melted wrist-watch, in hopes that they will think again on the direction they are headed.
Posted by David E. Nye at 9:36 PM