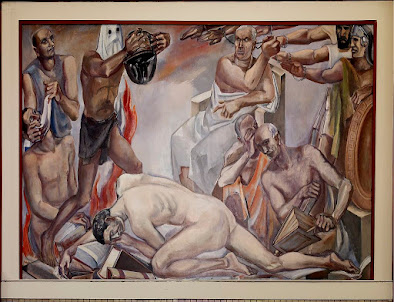 "Intolerance," by Maurice Sterne, 1941
US Department of Justice, Main Library, Washington
Photo: Carol Highsmith
The Law: The Constitution dictates that only if two-thirds of the Senate find a person guilty can they be convicted of an impeachable offense. The Senate cannot fine or imprison a guilty party. The only penalty it can impose is a ban from holding public office. Other punishment is left to the courts.
Scenario 1: All the Democrats and at least 17 Republicans vote against Trump, making him the first president ever to be found guilty by the Senate. Richard Nixon resigned rather than face such a vote. Andrew Johnson was almost impeached and convicted by a Republican dominated Senate in 1868. There were 35 votes against Johnson (guilty) and 19 for him (not guilty). The Republicans needed just one more vote, but did not get it. Historically speaking, a president has never been convicted. The founding fathers intentionally made it difficult, requiring not a mere majority but a very large majority, in order to avoid impeachment becoming a matter of mere partisanship.
For Trump to be convicted, additional evidence will need to be presented during the trial, evidence so damning that it would force Republicans to repudiate him. Given the several week delay in starting the proceedings, it seems possible that Democrats might find such a smoking gun. For example, there might be a phone call or an email that links Trump directly to those who invaded the Houses of Congress. Conviction would divide the Republican Party into two irreconcilable camps, in the short term, but as happened after they repudiation of Nixon, the GOP would be in a position to revive and move on. This is a bitter pill for Republicans, but it the best option for them in the long run, and also for the nation.
Scenario 2: A majority of the Senate votes to convict Trump, but that majority falls short of 67 votes.  Instead, he could be taken to court on related charges and found guilty. For example, he might be charged with incitement to riot and being an accessory to the murder of one or more of the people who died in the attack on Congress. In addition, there are other court cases awaiting Trump, notably in New York State. A court conviction of any kind would weaken Trump and keep Republicans in turmoil, and might lengthen the struggle for control of their party until the 2024 elections. Normally, the party in power loses some seats to years after winning the presidency, but if the Republicans are internally at war, the Democrats would have a chance to win additional power the 2022 Congressional elections.
Scenario 3: Trump is neither convicted by the Senate nor convicted of any crime in court. He could present himself as a victim of left-wing conspiracy. His supporters would feel righteously justified, and his control of a majority of the Republican Party would continue. The result, Trump will re-energize his base, while the country remains deeply split.
Which possibility is most likely?
Scenario 1 is not very plausible, but it is Plan A for both Democrats and few Republicans who want to escape Trumpism. However, there are not 17 Republican Senators who look likely to convict Trump. Unless dramatic new evidence is presented to the Senate.
√ Scenario 2 is the most likely. In that case, Trump will only lose some support because of the impeachment trial and lose a bit more after being convicted of economic crimes, such as fraud, tax fraud, or money laundering. (There are apparently many other possibilities, too.) This would keep Republicans split and be good for the Democrats in 2022.
Note added 15 Feb: This is indeed what happened.
Scenario 3 is possible, but not likely. Democratic Party leaders have a good idea of what court cases Trump will face after his trial in the Senate.  It seems exceedingly likely that he will face prosecution, and for that reason, the Democrats can take the high ground and demand an impeachment trial before the Senate, knowing Trump will soon be tied up in more litigation afterwards.
Whatever happens, the punishment of Donald Trump has, in all likelihood, only just begun,
Posted by David E. Nye at 2:46 PM