On the Line: Reading Harvey Swados


As part of my research on the history of the assembly line in the United States, I have been reading Harvey Swados for the first time. The name I knew, but not the work, which remains interesting after half a century. His short story cycle, On the Line, describes the lives and aspirations of eight men who work together in a new automobile factory in New Jersey, c. 1956, the year when Swados himself was on the assembly line in such a plant. 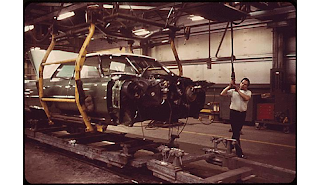 On the Line first presents LeRoy, an African American who aspires to be an opera singer, but needs money for more voice lessons, and so goes on the assembly line. An injury cuts off his chance for a musical career, and he remains mired in the job. His partner in the factory is a young Irish immigrant, Kevin, who is at first stunned by the size, the noise, and the bustle of the factory, and saves money to buy himself a car. But then having tasted the material dream and its price, he goes back to Ireland.

The other characters are a reformed alcoholic, a aging widower, a failed businessman in his 50s who needs the money, a high-school graduate who saves his paycheck for college, a foreman who has worked his way up from the shop floor, and finally Joe, the closest thing to a stand-in for the author - an older man who seems well read. He refuses to get psychologically trapped by any job and drifts from one factory to another.

Swados is effective precisely because the characters are each revealed in their private as well as their work lives.  We learn of their marriages, children, homes, and problems, as well as see them at work. His goal was to get away from any romantic notion of a unified, rather homogeneous working class. At the same time, however, Swados was writing against the Cold War-inspired notion that the US was fast becoming a society with minimal class differences. This was the sociological orthodoxy for a brief time, but no one reading this book could come away believing it was true then, any more than one could believe it now.

These are excellent stories that can be read separately but gain in power when taken as a whole.
I found Swados insightful and useful in researching America's Assembly Line (MIT Press, 2013).
Posted by David E. Nye at 6:18 PM