If corporatations are people, then hostile takeovers are corporate rape 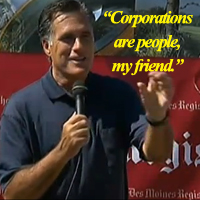 2. Abortion is wrong in all its forms
Republicans also have a plank in their party platform (approved at their Convention) that opposes abortion, without noting any exceptions. This platform therefore applies to corporations.

3. Corporate abortion should therefore be outlawed.


The syllogism applied to the economy

1. Hostile takeovers are corporate rape. But if they produce offspring (profits, new companies, assets), then the rape was legitimate, as a corporation that resisted takeover would not be fertile.

2. Divisions sold off after a hostile takeover have a right to life, for they are people too.

3. A corporate takeover of Medicare or Social Security, if approved by a Republican Congress, would not be a hostile takeover or a corporate rape but a profitable arranged marriage.

4.  Government regulation of any market, like contraception, is a violation of nature. It strangles economic growth, and is therefore a form of corporate birth control and in many cases corporate abortion. Regulation leads to economic murder.