As ( I hope) Sarah Palin fades into the obscurity she so richly deserves, the name Palin may remain  to enrich our vocabulary. Many people's names have turned into common terms, including Diesel (a German engineer who invented that engine), Guillotine (a French physician who invented you know what). and Stetson (after an American hat maker).   Here are some of the Palin possibilities.

Palinesque: loud and self-assured but without substance.

Palinoscopy: a probe to nowhere.

Palinitude: a statement that seems obviously true to right-wing Republicans and obviously false to everyone else.

Palingo: grammar so fractured that meaning disappears.
Palinicity: (a sort of mental ethnicity) to refer to people with little education but passionate self-assurance, who embrace moralistic rhetoric, fundamentalist religion, and blind patriotism. Future commentators might say that a candidate's palinicity has yet to be tested.

A Palin Move: nominating an unsuitable but physically attractive person for public office.


There may be other wonderful possibilities, but I fear that this column might degenerate into a palinoscopy. I do suspect, however, that this comment is an anti-Palinitude, i.e. appearing obviously false to right-wing Republicans, and true to all others, 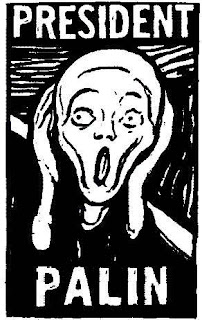