Romney and the Middle East


There is no justification for killing people because of a film, nor is there any reason to label this film "American" when it was apparently made by a Coptic Christian, i.e. a man with Egyptian roots. Nor does it in any way express the views of the American people. Nor has the film even been seen by many people, much less been reviewed. That fanatics are prepared to blame the film on the US and to use it as a justification for killing people, attacking embassies, and violating the most basic of diplomatic rights, is totally unacceptable. But in the American political campaign, that is not the point. All Americans will agree.

This situation presented Candidate Romney with a simple test of his ability to respond to a crisis. He  failed this test. Admittedly, he has little foreign policy experience. His visit to Britain was a disaster, as he managed to insult his hosts with completely unnecessary crtiical remarks about whether the country was ready for the Olympics. All he had to do was smile and talk about the "special relationship" but he made a mess of it.

This ineptness seems to have emerged again in his comments on the film that has provoked rage in the Muslim world. Romney was quick to condemn the murder of the US Ambassador and the attacks on US embassies. That was a no-brainer. But it took Romney four days to condemn the film itself, in vague terms.  He seemed reluctant to do so.

The Nation has investigated the origins of the film, and uncovered a network of Romney supporters and foreign policy advisers who have extensive contacts with anti-Muslim groups, with some indirect connections to those who made it. The Nation does not propose a conspiracy theory, nor do I. It is sufficient to point out that virulent stereotyping of Muslims, like that in the offending film, is rife on the far right. The current crisis will have the effect, intended or not, of motivating the most extreme, xenophobic voters. Romney seemed reluctant to condemn the film. His instinct was not to be a statesman.

On both sides – in the Muslim world and in the United States –  extremists who hate each other will seek to profit from the crisis the more severe it becomes. Moderation and dialogue is what the world needs, not demonizing stereotypes. We know that President Obama can keep calm and focused in difficult times. Would Romney be able to do that? 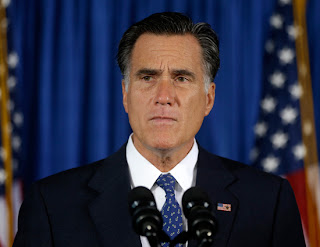