The tenth anniversary of the 2003 Blackout passed a few days ago. Fortunately, such a large blackout has not occurred again inside the US, but this is no reason to feel sanguine about electricity supply. The blackout in 2003 was a cascading failure that started in Ohio, tripped by an overhead line touching a tree limb. It was a hot day, which meant that demand for air conditioning was also high, and that caused the high tension lines to heat up. When this happens, they sag down. Power companies know this, and well-run companies make sure that the area below the lines is kept clear. But trees and bushes keep growing, and when not kept in check they soon rise closer to the lines.

In short, the time of the accident was hardly a surprise. August is late in the growing season, when trees have had months to intrude upward. A hot day in August is hottest in the middle afternoon, and this is when the lines sagged down and touched the trees. The cascading effects knocked out power for 50 million people in Ontario, Canada and the eastern United States. The old adage, "For want of a nail, the horseshoe was lost. For want of a shoe, the horse was lost. For want of a horse. . ." still applies.

Since 2003 the monitoring of the power system has improved, and power plant operators have a few seconds more to notice when a problem occurs. But remember that electricity moves at 186,000,000 miles per second. A breakdown in Ohio can cascade a long way in one second. 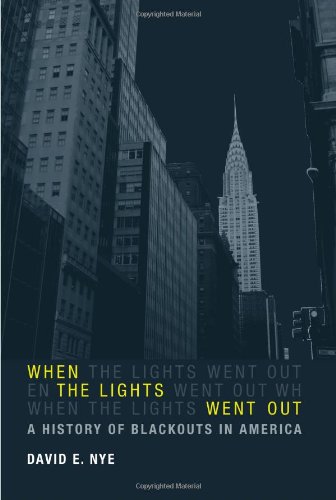 If you want to know more about this problem, including how blackouts relate to terrorism, the smart grid, and the future of energy use,  a New York Times article appeared in November the same year that this was posted, and I have also written a short book on the problem, When the Lights Went Out.
Posted by David E. Nye at 12:57 PM