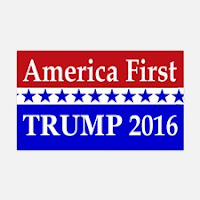 
In his inaugural speech, Donald Trump made a point of saying that his administration would put America first.  This is in striking contrast to many previous presidents. John Kennedy said the US would "bear any burden, pay any price" to defend freedom and democracy in the world. Trump said:

"From this moment on, it's going to be America First. Every decision on trade, on taxes, on immigration, on foreign affairs, will be made to benefit American workers and American families. We must protect our borders from the ravages of other countries making our products, stealing our companies, and destroying our jobs. Protection will lead to great prosperity and strength."

The America First Movement was prominent in the early years of World War II. It advocated that the US remain neutral in the conflict, and had many supporters until Pearl Harbor. The slogan "America First" was used at the 2016 Republican Convention, and at the time National Public Radio and other journalists noted the unfortunate history of this slogan.

Nevertheless, Trump repeated this phrase emphatically in his speech. It suggests a return to isolationism and mere self-interest in foreign affairs. There is nothing idealistic in such a phrase. Nor is this the first time he has said it. Back in March, during the Republican primaries, he also said he advocated "American First," and he did so again in what was billed as a major foreign policy address in April, covered by CNN. The phrase has often been associated with a lack of sympathy for or understanding of the plight of Jewish people and other minorities in Hitler's Germany.

At best, it is unfortunate that Trump persists in using this expression. Republicans have often used coded language to appeal to special interest groups. Reagan did this in his time as president, encouraging religious conservatives through veiled references to the Bible, and now it appears that Trump is doing the same thing. The extreme right wing certainly knows about the "America First" movement.  Trump was slow to distance himself from extreme right wing groups, and he has made a right-wing ideologue, Steve Bannon, his close advisor in the White House.

The mainstream media seem intent on normalizing Trump. Today they are emphasizing the peaceful change in power, and trying to suggest that the change is just part of the ebb and flow of American democracy. But the slogan "America First" hints at something else, something less savory. It suggests a fundamental reorientation toward self-centered isolationism. This would be consistent with Trump's repeated statement that he thinks NATO is obsolete, his refusal to accept the reality of global warming, and his attacks on free trade.

It is only day one, but there are many reasons to worry. Keep watch.
Posted by David E. Nye at 8:01 PM