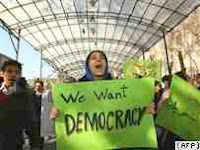 Elections are the central events in democracies, giving voters the chance to reject some candidates and embrace others. A fair and free election strengthens the rule of the people, as both winners and losers learn to accept the will of the voters. But the farcical election in Iran does none of these things. No one can seriously believe that only two hours after the polls closed that the 46 million votes had been counted. No one thinks that all the opinion polls taken before the election were wrong. They showed a close race, with no one likely to get a majority. Yet shortly after the polls closed the government could announce that what had appeared to be a close contest actually was a lop-sided landslide, in which the incumbent received almost two-thirds of the vote.

Democratic elections also include extensive public discussion about what happened and reconciliation between the winning and losing candidates. But in Iran the government has used tear gas to break up rallies, shut down internet sites, intimidated opposition politicians, and cut off the use of text messaging. In doing so, the Iranian government throws further doubt on the legality of the election, enrages the opposition, and disqualifies itself. It is an insult to world opinion to pretend that this has been a free or fair process.

Once again, the educated, middle-class Iranians have been robbed of the opportunity to build a modern state that is part of an international world of states. Instead, critics who claim that Islam and democracy are fundamentally incompatible have another dismaying example for their arguments. But I remain hopeful that one day Iran will peacefully join the larger world as a democratic state. I say this because of the passion for justice, fairness, and democracy demonstrated in the election campaign. Sadly, however, it appears Iran will inflict much suffering on itself before reaching that goal.