Socialists and the Socialist People's Party campaigned on the green platform of improving mass transit, reducing fares, and taxing the heavy traffic that floods into Copenhagen every day. Now that they have won, however, the plan is to do nothing of the kind. Instead, they will make no improvements in mass transit, raise the fares, and yet still impose the road pricing on those who drive into town. So taxes will go up, prices will go up,  quality will go down, and the roads will remain just as crowded. This is not what one expects from a socialist government. One expects them to be able to deliver social services. 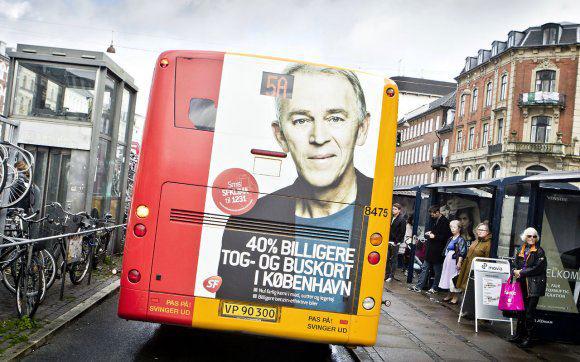 The photograph shows a Copenhagen bus advertisement promising that if they come to power the Socialist People's Party will lower bus and commuter train fares by 40%.  Instead, they will rise 3.1%

The Socialists have broken many campaign promises, notably to the universities and the hospitals. They have decided not to return to the tax code in use when the country was prosperous and could afford its social services in the 1990s. Rather, they will keep the lower tax rates developed by the previous conservative coalition. The new government seems to have been captured by the same incompetent planners and economists who advised the conservatives. It appears that there is almost no difference between Right and Left in reality, with the notably exception of how they say they will treat immigrants.
Posted by David E. Nye at 1:38 PM