An Electrical Blackout Just For Me?

The storm that lashed Denmark Saturday night with hurricane winds caused a blackout at our house. We were watching television when suddenly all the lights on the ground floor went out, and the film we were enjoying disappeared. The buglar alarm began to ring, as it does when forced over on to battery power. Not its forceful full screaming mad sound, but an insistent call for assistance. Looking out the window, my wife and I immediately saw that the neighbors were not affected, and we soon found that the floors above and below us still had power. It seemed obvious that the problem could be solved by changing a fuse. We found a flashlight and a fuse, made the change, and. . . nothing happened. By this time we were getting a bit cross, missing the film, and quickly put in another fuse, also without any result.

All this time the burglar alarm continued to ring, intermittently, and we began to wonder if we might be hearing this all night. So we called the security company and asked if they could stop it, and of course also reported that the power outage was the reason. We could hear the wind howling.

It being the middle of a weekend, the last thing we wanted to do was call an electrician, because coming for an emergency on a Saturday would cost us a minimum of $200, based on past experiences when we needed a plumber or a locksmith. So I decided to go outside in the rain and wind to see if by any chance I could spot the problem. It seemed unlikely, but worth a try.

Outside there was lots of wind, but little rain, and I shone the flashlight up on the side of the house where the four electric lines come in. They all seemed very securely attached. But then, from the corner of my eye I saw and in my right ear I heard a buzzing bluish spark. One of those four lines was loose at the other end, where it joined the main line!

We called the power company, assuming that we would have to wait, perhaps even to Monday, but glad we knew the problem. It was not a short-circuit caused by a leak, for example, which would have been hard to find, expensive to fix, and in the meantime a danger.  This was far better, as the problem was not our fault, and we would not have to pay anything.

Remarkably, a crew was on the scene in less than two hours from the time we called, and by 11 PM a truck with a lift had taken a man up to the loose wire, sizzling there in the rain, and his nonchalance made him casually heroic in the gusting wind. In less than two minutes he had reattached the electrical line and the power was on again in our house.

What does this event mean? Well, that some things work really well in Denmark. But not everything. One of the most frequent causes of blackouts is a failure to trim trees growing beneath power lines. Did I forget to mention this? The electrical line that failed is slightly entangled in a tree, and our neighbor whose windows are closer to the connection than ours, asked that someone from the city come and cut it back. Nothing was done, however, as the municipality seems to be saving money on such things.

That said, it nevertheless did seem rather amazing that of all the houses on this  street, ours should be the one affected, and only one floor, where I happened to be. After all, my last book was about electrical blackouts. Power failures are usually more widely shared, but this one was quite private. 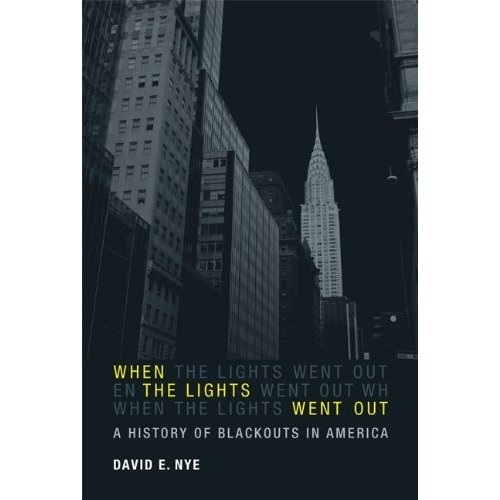