Benjamin Franklin (1706-1790) was one of the most famous Americans in his own time, and he has remained an iconic figure ever since. He is on the $100 bill, his Autobiography is still in print, and some of the institutions he helped create, notably the University of Pennsylvania, are flourishing. He was interested in everything, and his curiosity led him to discover that lightning was a form of electricity. He invented a practical and efficient stove. He discovered the existence of the Gulf Stream. In his 80s, when his eyes were weak, he invented bifocals. Franklin was also a consummate politician and a key figure in creating the American Revolution.  Yet one looks in vain for a Franklin house or homestead in the United States. The houses where he lived have not survived.

The reasons for this are not hard to find. Franklin lived abroad most of the time from 1757 until 1785, almost entirely in London and Paris. In both capitals he represented the Americans. First, in London, he served as representative for several colonies in their affairs with the British government. Before the Revolution, he functioned as a proto-ambassador. Afterwards, he was the first American ambassador to France (1776-1785). 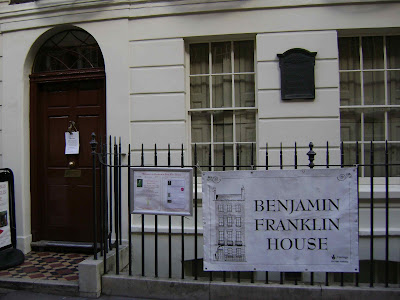 In London between 1757 and 1775 he lived at 36 Craven Street, close to Charring Cross Station (built much later, of course). This house was opened as a museum in 2005, and it is well worth a visit. Fortunately, the house is easily accessible, being just a few minutes walk from Trafalgar Square. No doubt Franklin chose to live there because it was near government offices. It was also a convenient place for his many scientific friends to drop in.

The Georgian house was relatively new when Franklin rented its best rooms and hired a family to keep house for him. It survived fire, flood, and World War II's bombings, which destroyed several other houses nearby. The place was nearly falling down when saved for posterity. The restored rooms are largely bare of furniture, but their woodwork and arrangement are preserved.

Visitors are taken on  a tour into the past by an costumed actress/guide who holds a dialogue with disembodied voices that have been pre-recorded. The visit to each room becomes a dramatic vignette, that seizes the imagination more than one expects. This sort of thing can be done badly, but it worked well for me, and seemed historically accurate. For the people whom I took the tour with, this technique worked also extremely well. It was like attending an innovative theatrical production.

The next time you are in London, visit the house and get a glimpse of Franklin and of how he lived in c. 1770. If you are interested in doing research on Franklin, note that the top floor of the house has been made into the Robert H. Smith Scholarship Centre, with an array of source materials, plus links to Yale University and other centers that hold Franklin materials.

Finally, in case you have not already read it, Franklin's Autobiography is an excellent book, available in many editions, and also in digital format.