I had the pleasure of spending one day in the Cleveland Public Library. The librarians were knowledgeable, courteous, and efficient. The two buildings were handsome places to work, but the real test of a public library or an archive for a historian is what one finds. Sometimes an entire day yields almost nothing, perhaps due to poor luck, but often due to poorly organized materials, finding aids that are inadequate, or staff who make only a minimal effort. Sometimes, I get what I hoped to find, and go away satisfied, which was my experience on a similar mission at the Boston Public Library a year ago. But once in a great while I find much more than I had dared expect, and if this happens it almost always is because the librarians and archivists are real professionals.


In this particularly happy research expedition, I spent almost all my time in the photographic collection, housed in the newer of the two library buildings and located on the fourth floor. All the images that I requested seemed to be near at hand, not buried in a vault or stored off-site. Moreover, the staff, led by the extremely capable Margaret Baughman, took a real interest in my project, and suggested places to look that I had no way of knowing about.

In the space of a single day, I reviewed hundreds and hundreds of images, selecting 14 in the end for reproduction. These images were scanned and ready for me as digital files the following day. Moreover, the price was extremely fair, in an age when every archive routinely demands $100 or more for each image. I have paid as much as $500 for a single image from a well-known magazine, whose name you might guess but I will not specify here. Such high prices force historians to make compromises or omit images, unless they are fortunate enough to find an oasis like the Cleveland Public Library.

Below, I reproduce one of the images I found there, but to fit it within this blog it is a mere jpeg file, not the wonderful TIFF scan provided to me. This is too large for easy use on this blog. 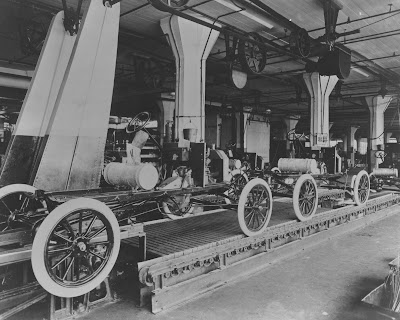 This image shows part of the Ford Motor Company's Model T assembly line. This is how it looked in c. 1915, when the method of manufacturing had just being invented. It was so new it did not yet have a widely used name. Originally, this photograph was used in one of the Cleveland newspapers, now defunct, whose images were donated to the Cleveland Public Library. I amusing it in America's Assembly Line, to be published by MIT Press in 2013, a centennial history of the assembly line in American culture.


Many of the best things in life are unexpected. The efficiency, intelligence and helpfulness of this library staff make Cleveland an attractive place to do research, and I very much expect to return for help with a quite different project, dealing with a young man who grew up in Ohio and edited a newspaper there for some years before the Civil War.