All the polls say that Romney will win the New Hampshire primary, and some are silly enough to deduce that this is simply because he is local. But it is not so simple. Romney has 41% in an average of the polls taken (as of yesterday, Jan. 7), which sounds pretty good. But where are the other 60% of the voters?

I know New Hampshire chiefly through my father, who was born there and grew up on a farm there. He worked his way through the University of New Hampshire. Like his father, he remained a Republican all his life, the kind of Republican who is hard to find these days, though they still can be found in The Granite State. Romney appeals to such people. They are not much like the Bible Belt Republicans. They believe in small government, self-reliance, and hard work. They are not much for welfare, though generous to what they would call the truly disadvantaged., such as the blind, or to war veterans who lost a limb. They typically come from rural areas and smaller towns, often, like my Dad, from families that have been in North America since the seventeenth century. Compared to the rest of the Republican Party, these New Hampshire Republicans value education more. They do not talk like Gov Perry but like Gov Romney. They are less emotional, more rational.Some of them will be drawn to Ron Paul (currently about 20% in the polls) and others to Gov Huntsman (currently has c. 10% in the polls).

New Hampshire's Republican Party is more complex than that, of course. The State has a much lower tax rate than next door Massachusetts, and many people choose to live just over the line. They work in Massachusetts but live in New Hampshire. These are not factory workers, but upper middle-class people who have excellent jobs, often along Interstate 495 or on the old Route 128. They represent high-tech companies, and are technically savvy people, the sort who can easily identify with the Harvard educated Mitt Romney who played a leading role at Bain Capital.  Romney is especially strong with these voters, but some of them will likely go to Gingrich as well.

We can visualize these two constituencies by looking at a map and some charts, which come from The Wall Street Journal. The farmers and small town Republicans are further to the North. The majority of the state population, however, lives in Manchester and Nashua counties, along the southern  edge of the state. As one can see below, Romney's appeal in Iowa was weaker in 2012 than in 2008 everywhere except for the wealthy "burbs" - and fortunately for him, New Hampshire has many such voters in this southern tier. 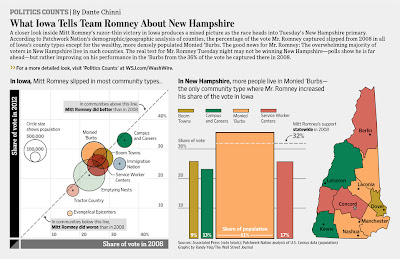 These are the two key constituencies for Romney, but they are not the whole story. There are other kinds of Republicans in New Hampshire who are more like the Southern version of the party. 23% of the voters are Evangelical Christians who are suddenly flocking to hear Rick Santorum. There is also an energetic local Tea Party, that energized the Republicans to a stunning sweep in the last legislative elections. In addition, there are many conservative Catholics who will not support Romney because they focus on abortion, gay marriage, and other such issues. The Catholics are either of more recent immigrant background or they are French Canadians, who flocked into the state from Quebec after 1850 to work in the mills. These groups overlap, of course, as either an Evangelical or a Catholic might be a Tea Party activist. The big question going into this primary is whether Santorum can galvanize this constituency, and rise well above his current c. 10% in the polls. In theory, he could easily get double that and challenge Ron Paul for second place.

New Hampshire has no really large cities, but of course there are also urban-based Republicans, typically the small businessmen and lawyers. They are worried mostly about economic issues, and they also will likely support Romney, though some will go for Gingrich.

But the New Hampshire primary also has another factor that is hard to figure. Independent voters, i.e. those who are not registered with either of the parties, can and often do vote in the primary. This means that a large number of moderates will be casting their votes in New Hampshire, and this too tends to favor Romney and work against most of his opponents, with the exception of Huntsman, who is also a moderate.  In 2008 such voters seemed to have swung to Hillary Clinton in the last two days before the primary, which many mistakenly thought Obama would win. This time around the Independents might once again change the result. But will the Independents go for Romney, Gingrich, Paul, Santorum, or perhaps Huntsman? It is hard to tell, and thus all the more interesting to watch.

I worked in the New Hampshire primary for Senator Eugene McCarthy back in 1968. His central issue was opposition to the Vietnam War, and  he was running against Lyndon Johnson, a sitting president. McCarthy shocked the nation by winning over 42% of the vote.  Technically, he lost, but LBJ withdrew from the election not long afterwards.  By the same token, eveyone expects Romney to win big. He risks winning by too small a margin. Anything below 35% will be regarded as a poor showing.  Fortunately for him but unfortunately for the Republican Party, the opposition is divided, and none of them has even remotely the stature of Eugene McCarthy.