Election 2012: Obama's Popularity Surges After State of the Union


President Obama gave a crucial "state of the union" message last night, and hit a home run. His approval ratings have shot up to an unbelievable level, with 91% of Americans saying they approved his proposals for helping the economy.  He looks ready to tell a more populist story than before, and it seems to be working. It was a powerful speech, and if you have not seen it, have a listen. If you want a quick summary, as one pundit put it, "Due to my policies, Bin Laden is dead, and GM is alive." 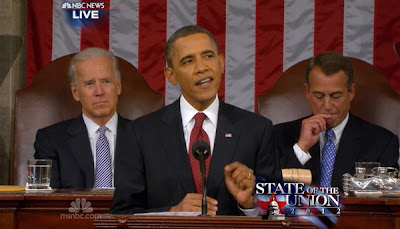 Meanwhile, the Republicans have a problem. Their Mitt Romney had to confess that he makes $57,000 every single day, more than $20 million a year. This was according to the tax returns that he was forced to release by popular demand. He would have had to reveal his income if he became the candidate, but he ended up releasing the information the day that Obama was criticizing the rich for being irresponsible and avoiding paying their fair share of the taxes.

So where is Romney's money and how is it that he pays less than 14% in federal tax, about half the rate for the average American? It turns out Romney has some millions in tax havens, like the Caymen Islands, and in Swiss bank accounts. He is also the beneficiary of low tax rates on capital gains (from sale of stocks) - low rates put in place by the Republicans, of course. It appears that there is nothing actually illegal in the Romney tax records, but they are rather alarming. One begins to understand why he could offer to bet Rick Perry $10,000 about who was right on a particular issue. Ten grand is what Romney makes every six hours, even when sleeping, for not working.

The only problem Obama has now is that Romney may fold. Gingrich is running well ahead in national Republican polls, and slightly ahead or even in Florida, depending on the poll.  So Romney is being attacked by both the right in his party and by the Democrats. Obama is betting that Gingrich would be easier to beat, and that it therefore is better to hammer Romney out of the way, leaving the President as the only one on the center ground.

The election will be decided by the moderates in each party and by the Independents, and all the indicators are that Obama is winning them over.Gingrich, by comparison, is much further to the right and bragging about it. One begins to sense doom for the Republicans now, unless they find an entirely new candidate at the last minute, which is very hard to do given the primary system.