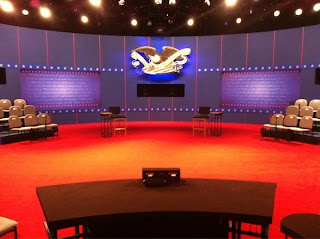 In the second debate President Obama was far more focused and sharp. He continually called on Governor Romney to explain his policies in detail, and he several times drew attention to how he had flip-flopped on important issues, such as abortion, immigration, and assault weapons. Romney once was willing to accept abortion, now not. He once had a milder view of giving illegal immigrants a chance to become legal, but now he argues for draconian policies that will force illegal immigrants to voluntarily "self-deport." He once thought there ought to be limits on how powerful weapons might be before they no longer are protected by the Bill of Rights, but to get the support of the National Rife Association, he now thinks assault weapons capable of firing many bullets with extreme rapidity are just fine. Romney at the debate was suddenly claiming that he was supportive of solar and wind power, although his energy policy statement only mentions them briefly in order to attack them. Obama did not point that one out, unfortunately. The Romney energy policy statement says he would allow utilities to release more CO2 and that he would abolish the higher mpg standards for cars. Voters ought to know that.

Romney was caught in his contradictions, but not all of them. I find it incredible that his extensive investments in the Cayman Islands did not come up when discussing tax policy. I find it amazing that his secrecy about his own taxes did not come up. He has refused to release more than two years of his returns in contrast to all other candidates, including his own father, who began the practice a generation ago. All other candidates for the presidency since them have revealed their their tax payments.  It would be rather easy for Obama to ask him what he is trying to hide.

CNN polled immediately afterwards and found that Obama did win, though not as big a win as Romney had the first time. Having seen both debates, I doubt that the third one will change the dynamic much, unless one of the candidates makes a major mistake. One of the problems is that the voters seem ill informed. The actual positions (and contradictions) of the candidates can be discerned through their previous statements and actions. But the questions and discussion do not build on what is already known.

Rather, the debates are a bit like a passionate discussion in a seminar where most of the people present have not done the reading. So Romney or Obama can say most anything that sounds plausible and the average voter falls for it, especially, it seems, those undecided ones visible on television. I saw one group of ten interviewed, eight of whom still did not know which candidate they supported after the second debate was over. With such obvious and strong contrasts between them, I find this quite incredible.

The campaigns now will focus on particular voting groups.

Will Hispanics realize that Romney has embraced hostile immigration plans, and that the man who drafted the draconian Arizona law is Romney's advisor?

Will women, who have been shifting toward Romney after the first debate, become more concerned about Romney's (and Ryan's) very strong anti-abortion position, his desire to slash funding to Planned Parenthood, and his desire to abolish Obamacare?

Will young people understand that Romney's claims that he knows how to create jobs are based on nothing at all. He lost jobs in Massachusetts when the economy was far better than now. At Bain Capital he presided over a policy of slashing jobs to maximize returns on investments. Nothing in his record suggests that he cares about workers or the middle class, except when he needs their votes.

If these three groups -- Hispanics, women, and younger voters -- understand what Romney's plans would mean for them, then they should turn out in large numbers and vote for Obama. But there is so much negative advertising in the swing states that the Romney flip-flopping may not be apparent and his vagueness on details may not be detected.
Posted by David E. Nye at 5:56 AM