What has Obama Done? Achievements Since Taking Office 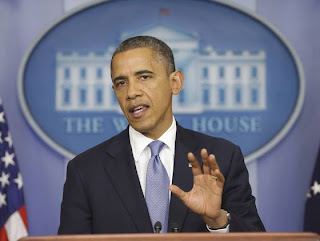 President Obama has achieved more than some people realize. Here is a list of some of this major accomplishments. It is an impressive list, considering the economic shambles and expensive foreign wars he inherited from George W. Bush. (The Republicans never mention Bush now. In 2001 he inherited a healthy economy and ruined it. He inherited a shrinking deficit, and expanded it. He inherited a nation at peace, and started two expensive wars that were still going on when he left office.)

The accomplishments of the Obama administration can be divided into four categories: Economy and Tax Reform, Equality and Welfare, Energy and Environment, and Foreign Policy. In addition, I note below some of the cases where Republicans opposed or did not support these achievements.

He rescued the auto industry, and now GM and Chrysler are prospering again. The American auto industry has added nearly a quarter of a million jobs since June 2009.
In contrast, Romney published an op-ed piece saying that the Federal government should not help GM and Chrysler, and that bankruptcy was the best option.

His Recovery Act helped to stave off a second Great Depression.
Many of the Republicans in Congress opposed this Act.

He pushed through middle-class tax cuts that saved the typical family $3,600 over the last four years.

He has signed 18 tax cuts for small businesses in his first term.

There were 5.2 million new private-sector jobs during his first term, and the unemployment level has continued to fall, despite the fact that many corporations are replacing workers with robots.

He ordered the overhaul of federal regulations to make them more practical and  efficient. In the next five years this will save businesses $10 billion.

He created a landmark Wall Street reform that reins in abuses that led to the financial crisis and ends the era of taxpayer bailouts and "too big to fail."
Republicans de-regulated the financial industry and during the GW Bush years they neglected their duty to keep an eye on it.

Wall Street reform created the Consumer Financial Protection Bureau, the nation's first federal agency focused solely on consumer financial protection. The Bureau protects families from unfair and abusive financial practices from Wall Street and the financial industry.
Republicans fought the Consumer Financial Protection Bureau, and when it was passed into law, they delayed the appointment of administrators to run it.

The first bill President Obama signed was the Lilly Ledbetter Fair Pay Act to help women get equal pay for equal work.
A majority of Republicans voted against this bill.

He doubled funding for Pell Grants, to make college affordable for 10 million families.
His student loan reform ended billions in bank subsidies cutting them out as middlemen and reinvesting those savings directly in students.
A majority of Republicans voted against this bill.

He established the American Opportunity Tax Credit, worth up to $10,000 over four years of college.

Health care reform provides affordable  coverage to every American and will lower premiums by an average of $2,000 per family by 2019. Obamacare also expanded access to lifesaving preventive care such as cancer screenings and immunizations with no out-of-pocket costs for 54 million Americans. Obamacare ends insurance discrimination against 129 million Americans with pre-existing conditions. Because of Obamacare 3 million more young adults have health insurance.
Almost all Republicans voted against Obamacare. Romney championed similar legislation in Massachusetts but later opposed it.

Obama repealed Don't Ask, Don't Tell, allowing gay and lesbian members of the military to serve openly for the first time. He directed the Justice Department to stop defending DOMA in federal courts, and took the practical and compassionate step of extending hospital visitation rights to same-sex partners.
A majority of Republicans voted against this bill.

When Congress failed to reform the immigration system, he streamlined the legal immigration process and adopted a policy that lifts the shadow of deportation from immigrants brought to the US as children.
Romney, Ryan, and the Republicans have called for immigrant "self-deportation" and take a harsh line against these children. 70% pf Latinos voted for Obama.

His investments in clean energy have helped more than double the electricity obtained from wind and solar sources and helped increase biofuel production to its highest level in American history.
Republicans opposed these bills.

He has doubled automobile fuel efficiency standards, which will save drivers thousands of dollars at the gas pump, reduce dependence on foreign oil, and reduce the impact of automobiles on the environment. He has helped cut US dependence on foreign oil to its lowest level in 20 years, and the US appears to be headed toward near self-sufficiency in oil and gas production. From an environmental perspective, however, this increase is based in good part on fracking, which pumps water and chemicals underground at high pressure, which can vitiate the local water supply.
Republicans opposed raining mileage stanards, but they legalized fracking during the last years of the Bush presidency.

He signed one of the largest expansions of protected wilderness in a generation and established standards to reduce toxic air pollution.
Romney would have "relaxed" air pollution standards for coal-fired utilities.

He sent the largest security assistance package to Israel in history and funded the Iron Dome system, protecting Israeli homes and schools from rocket attacks.

He expanded and improved health care and job training for returning veterans.

He negotiated the New START Treaty with Russia to reduce nuclear weapons in both countries.

Obama has accomplished a great deal. The American people deserve a more constructive Congress to help solve their problems.
Posted by David E. Nye at 8:27 AM