On 26 November Sotheby's auctioned off a copy of The Bay Psalm Book, which was the first book published in what became the United States of America, in 1640. The timing of the sale two days before Thanksgiving seemed well-chosen, as most Americans associate that holiday with the first settlers of Massachusetts. (However, the first such Thanksgiving dinner was celebrated by the Pilgrims in Plymouth, not the Puritans who produced the book, but only landed in Boston in 1630.)

To produce this book, the Puritans had to purchase a printing press and paper in London, at a time when they might have spent money on horses, millstones, or other practical necessities.This was just ten years after they first arrived and founded Boston, and four years after they established Harvard, to train clergy. 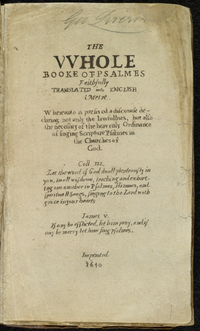 The Bay Song Book was a new, metrical translation of the psalms. The Puritan settlers included a number of scholars who knew both Hebrew and Greek, and they were determined to have a translation that was close to the original texts. The book also expressed their sense of the unpredictability of God. For example, at one point their translation ran:

The Lord will come and He will not
Keep silent and speak out.

Later generations found such passages contradictory, but they are impressive when sung to the melody provided by the Psalm Book.

The book at Sotheby's auction fetched a higher price than any other American book, ever, and more than even a Gutenberg Bible. The most expensive US book, previously, was John James Audubon's Birds of America, which sold for $11.5 million. This high value is not due to the psalm book's quality as an example of the printer's art, for there were many small errors in the first edition. Nor was the Bay Psalm Book considered particularly valuable in the first years after it was printed. Rather, it was constantly in use, and most copies of the first edition were literally worn out.

As a result, only 11 of 1700 copies from the first edition still exist, and almost all of these are in major libraries that will never sell them. Quite possibly, the one sold by Boston's Old South Church (which has another copy that it will keep), will be the last one ever sold at public auction, unless, of course, someone discovers one more in their attic. If you find one, do not toss it in the trash, no matter how battered, because this copy sold for $14.2 million.
Posted by David E. Nye at 7:46 AM