100 Danish Poems, From the Medieval Period to the Present Day - Bilingual Edition

This is the 300th entry in this blog, and a book came to hand that serves nicely to celebrate this milestone. 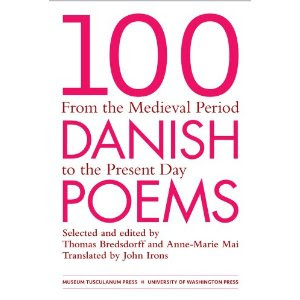 100 Danish Poems: From the Medieval Period to the Present Day  are not just any 100 poems but a careful selection of the best in Danish literature. They present a complex translation problem, as it simply would not do to have all the poems sound as if they were written in 2011, nor would it be a good idea to write in a modern idiom and then sprinkle in a few old words here and there from the appropriate time periods.

Fortunately, John Irons, who is British, has more than 25 years experience as a translator. He has lived in Scandinavia for more than 40 years, and frequently translates from Norwegian into English as well. He holds a PhD in Modern and Medieval Languages from Cambridge University and is a published poet himself. Irons is sensitive to the language and the rhythms of the poems and to the changes in literature that occurred from the medieval period onwards. In addition, he was able to work closely with both the Danish poet Klaus Høeck and the editors of the volume, Thomas Bredsdorff and Professor Anne-Marie Mai, who selected and edited the poems. She has also written a 43 page introduction that provides the historical and literary context many English readers will require. The poems themselves are presented without headnotes or footnotes that might distract.

Readers who know both Danish and English can decide for themselves whether they like the translations in this beautifully produced, bilingual edition. The original and the translation face each other on every page. Here is a sample, from pages 182-183, the first lines from a poem by Hans Christian Andersen:


Irons renders these lines as:

That ancient tree, don't let it fall
Until old age is knelling;
So many things it can recall
What tales it could be telling.

Note that he has retained not only the sense of these lines but also their rhyme and rhythm. He makes it look easy, but it is not.

The lonely young lamb on the hill beyond
can be heard with its plaintive small baa,
and the frogs all croak from puddle and pond,
as if star now were singing to star.

In childhood's long night, both dim and dark
there are small twinkling lights that burn bright
like traces memory's left there as sparks
while the heart freezes so and takes flight.


The reader may be tempted to try revising this example, but in doing so will find how difficult it is to preserve simultaneously the rhyme, the meaning, and the rhythm. John Irons retains the rhyme and the meaning, but to do so must sacrifice the original rhythm. I spent some time trying to improve it, but found I could not. Yet the effort helped me to see the Danish original more clearly, which is one of the pleasures of a book that presents both the original and the translation on facing pages.

The book is available in both Denmark (from Museum Tusculanum Press) and the United States (from the University of Washington Press).