After months of negotiations, the US and Iraq were unable to agree on how many troops might be left behind to help train and support the coalition government. Reportedly, the US suggested a level of 10,000, but the Iraqis wanted only half that, or even less. President Obama then decided, after repeated attempts to get a clear agreement, to pull the plug.

This seems the right decision, and probably the only option. Would a few thousand American troops really make much of a difference to the country's security? Keeping a symbolic force in the country might well have been a continued provocation to the opposition. Much better to give Iraq a clear message: the US is leaving. Iraq, you are now on your own, as a sovereign nation, to succeed or fail.

Nine years is a long time to intervene in any country, and the United States at some point must have higher priorities than continuing to keep 42,000 troops in Iraq. There were once four times that many, plus troops from the "coalition of the willing." 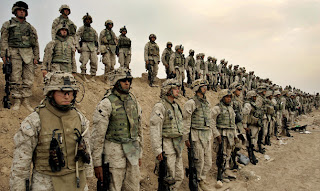 I was never a supporter of the invasion of Iraq, which was justified by the false claim that it harbored weapons of mass destruction. The country was ruled by a terrible regime, but removal of that regime has cost 700+  billion dollars and an enormous loss of life. The war itself was not difficult to win, but the Bush Administration disgracefully showered huge contracts on its political allies to rebuild the country and treated prisoners disgracefully, angering the entire Arab world against the abuses, displayed in photographs for all to see on the Internet.  An on-line poll conducted by MSNBC has found, as of this writing, that 87% of the respondents do not think the Iraq war was worth it. Many commentators share this view, including the Center for American Progress.

This nine years in Iraq offers quite a contrast with Libya, where the cost was far lower, the time required shorter, and American troops never entered the country. This difference strongly suggests the difference between Bush and Obama, Republicans and Democrats.

The arts of peace are more nuanced and difficult than the arts of war. Let us hope that Iraq will do better governing itself than it has under the occupation. But for the US, it is time to spend its scarce resources elsewhere. Think what that $700 billion might have been used for.
Posted by David E. Nye at 11:21 AM