More than half of all Americans report that they are stressed. The American Psychological Association has conducted a survey showing that half of Americans feel that their level of stress has increased in the last five years. There are many reasons for this, but here I want to examine one of them: the constant interruption of work and thought by new communication technologies. 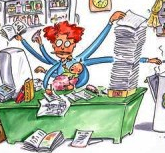 Once upon a time, the mark of success was having a secretary who screened an executive's phone calls and routinely said that he or she was in a meeting or otherwise unavailable. The most successful people were hard to reach. They had buffers of all kinds around them. Today many of the secretaries and almost all the buffers are gone. The ideal is constant availability: to have a phone handy and to check email at all hours, so that documents can be downloaded and read anywhere. This situation is not unique to white-collar workers. The plumber gets phone calls all day, and the contractor sends pdf files to his clients. Constant availability + new communication technologies = Stress

I have had unknown journalists call me before 7 AM, asking questions about events that occurred when I was asleep. I have students who send me things on Friday night and expect them to be read on Monday morning. I have been on conference programs as a commentator and received the articles I am to discuss in the airport on my way to the meeting. Everyone has similar experiences.

Why did most people in 1960 assume that to be productive a person needed shields from constant intrusions, while today the reverse assumption reigns: that productivity is supposedly based on constant networking while surfing ever higher waves of information (and trivia)? One is expected to follow a host of people on Twitter, Facebook, email, and text-messaging, and yet somehow have time for reading, reflection, writing and serious conversation. Interruptions have become constant, like static on an old radio that is continually on.

Such interruptions are far more frequent for young people. The Pew Trust found in a survey that almost all people under 24 use text messaging, and that they average more than 100 messages sent or received every day. They deal with more than 3200 a month. In addition, they make or receive 15-20 phone calls every day. Add to these roughly 120 messages all the email sent and received and top it off with Twitter and Facebook, as well as browsing the Web for information. If these many messages are distributed evenly over a 16 hour waking day that makes an interruption every five minutes. In addition,  there are TV programs and radio, as well as listening to music, usually through earphones.

People under 24 do not think of this endless stream of messages as interruptions, but rather as normal life. Yet I have a 17-year-old nephew who says he suffers from stress, and it seems to be a worsening problem among younger people. Time itself has become the scarcest resource, and enormous numbers of people feel stressed all the time. High levels of stress cause headaches, insomnia, high blood pressure, and fatigue, to make a short list. Stress also exacerbates many illnesses and in older people increases the risk of heart attacks.

Multitasking is often praised as proof of adaptability and productivity, but studies show the reverse. People who constantly shift between working on several different things take more time to complete their work. My observation is that the greater the number of tasks, the greater the chance that some of them will be forgotten entirely or will be poorly done. As an author in Forbes put it, whether old or young, "Your brain just can’t take in and process two simultaneous, separate streams of information and encode them fully into short-term memory. When information doesn’t make it into short-term memory, it can’t be transferred into long-term memory for recall later."

Would Hemingway have been a better writer if he had received a constant stream of messages from Twitter? Would Charles Dickens have written as many good books if equipped with email? Would Einstein have thought up the theory of relativity if he had an I-phone to distract him  with half a million apps? It seems likely that our mental and psychological makeup is not geared to a constant bombardment of messages, questions, advertisements, and comments. If consciousness is a stream, then all these interruptions are muddying the waters.

The solution? Turn off the phone and the email for some periods each day, so you can concentrate on doing one task well. Do tasks one by one, rather than simultaneously. Limit use of Facebook to a single period of no more than one hour (not during work) each day. These things have worked for me, though it would be even better if I had a full-time secretary/buffer between me and the tides of trivia and nonsense in the world. But that is a luxury of the past unless someone can develop an app to simulate that role.