Where did Syria get its poison gas?


I have read the headline stories in the newspapers of three nations, and fail to find much discussion of a vital question: Who supplied the poison gas to Syria? Such weapons are outlawed by an international treaty that has been widely respected since the 1920s. Such gas is not made in a basement by a self-taught chemist, and the delivery systems are also complex and demand sophisticated manufacturing.

Scientific American has posted an article about this issue, detailing the difficulties of determining who made the sarin gas. It points out that fragments of the bombs that contained the poison gas can offer some useful clues. "The materials composing the rockets could differ depending on who made them, thereby pointing a finger at who deployed them." This is no doubt true, but apparently no such analysis has yet been completed. 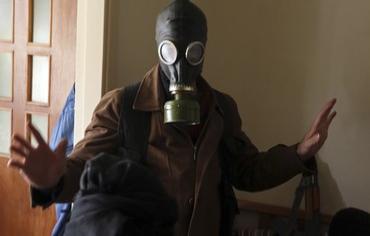 Meanwhile, Der Speigel reports that German Intelligence has concluded that the gas used was almost certainly sarin, and that it believes the Syrian government (and not the opposition) has the expertise to manufacture both the gas and the small missiles used to deliver it. The  delivery system itself requires considerable expertise. It sprays out the gas as a fine, deadly mist that lingers longer in the air during the early morning hours, when the missiles hit, than it does during the heat of the day.  In short, the gas, the missiles, and the sophisticated delivery system all point to the government. The same story reports that German Intelligence intercepted a phone call that also seemed to confirm Assad's direct involvement with the attack.

While different sorts of evidence seem to point to the same conclusion as to who used the gas, however, we still do not know who made it. A third party might have been involved. For example, Iran has the ability to make it, and it supports Assad. Russia has long been an ally, and of course they too could produce it. Whoever these persons are, they should be the focus of an international manhunt. The only use for sarin nerve gas is slaughtering indiscriminately all the people who happen to be nearby when it is released. Those who manufactured it and the military people who used it should be named, shamed, caught, tried, and punished. Their assets should be seized and used to help surviving victims. They must become infamous.

The Jewish Press says that the central figure in Syrian gas production is Dr. Amr Najib Armanazi. He is head of Syria's Scientific Studies Research Center. The United States Treasury reached the same conclusion, and as early as 2005 it imposed sanctions on him and his enterprise. Should there not be a warrant for  Dr. Amr Najib Armanazi's arrest and trial in The Hague?