Washington Shutdown: The US Defeats Itself 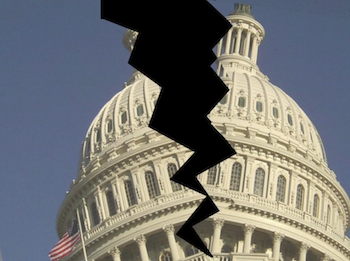 The deadlocked government is a pathetic spectacle. The US is becoming a fumbling superpower, and Washington seems to have lost touch with the dangers that lurk in legislative gridlock. Meanwhile, the world is moving on, even if the US government is not. Perhaps in theory no other nation is as powerful as the US, but in practice no external enemies are needed. The United States is defeating itself.


When future historians analyze the post-Cold War era, they will describe how the United States, without a major external threat to bind the government together, splintered into factions and undermined the nation's finances, its environment, and its ability to compete.

Because of internal divisions, the world's only superpower is losing its moral and economic leadership. Congress, and more particularly the Republican Party, bears major responsibility for the crisis, as the nation sinks deeper into debt while lobbyists protect special interests and ideologues slash essential programs, such as food stamps, that assist ordinary Americans.

The opportunity to be a world leader in alternative energy technology has been squandered, and other nations instead are developing those industries and making themselves more efficient than the United States. American energy use per capita remains twice that of Europe, not least because of the widespread use of fracking in the US, which pollutes ground water in order to produce more oil and gas and promote continued over-consumption of energy.

Congress has also failed to meet the need for affordable health care necessary to remain competitive with other industrial nations. Obamacare is better than the old system, but it is still a poor compromise. It is the best program that Congress could produce, but compared to what already exists in other nations, it remains a private and for-profit system that is over-priced. In America, decent health care is in danger of becoming a consumer good for the well-to-do, not a right for all citizens. Obamacare seeks to deal with that, but it is not an optimal solution.

Compared to health care available in Scandinavia, Germany or France, Obamacare is expensive because it requires an army of insurance industry employees, lawyers, and accountants, none of whom do anything directly for patients. They are supposed to make the system more competitive and therefore less expensive. This is akin to setting up competing traffic lights, sewer systems, libraries or fire departments based on a fantasy that this will improve service.

Congress has also gutted a tax system that was functioning well in the 1990s. After 2001 Bush created large deficits by reducing the income tax on the wealthy. As a result, the debt burden grew for a decade, and an increasing share of the federal budget is now used just to pay interest. With this debt burden, the government's ability to take new initiatives has declined, but Congress refuses to re-instate a tax system that can pay the costs of government.

Congress does not save in all areas, however. Since 2001 it has spent an unspecified amount, far more than $150 billion, on surveillance and spying. The spy agencies allegedly can read all messages and infiltrate everywhere, but they either cannot or do not wish to stop the epidemic of Internet fraud or the avalanche of spam, both of which are costly drains on the US economy. National security is now defined as almost entirely a matter of stopping terrorism, and apparently the Congress thinks that it is impossible to spend too much on that goal.

Symptomatic of the general American failure of these years are confrontations over the budget.  leading to today, October 1, with its government shutdown. The government is without funds. This idiotic brinkmanship puts the American currency and the US economy at risk.

Should foreign nations, corporations and investors lose faith in the political stability of the United States, the rush of money out of the country could possibly be irreversible. Oil might be traded in Euros rather than dollars, for example. Investors looking for a stable currency could go elsewhere. Suddenly, the US might need to pay its own debt rather than rely on others to buy its government bonds.  If that happens, the collapse will eclipse the crash of 2008, and the era when the United States was a superpower could come abruptly to an end. It could become a gigantic, economic invalid, with high interest rates, a huge national debt, and an outmoded energy system.

This extreme scenario is unlikely, but the Republicans are doing what they can to undermine permanently the integrity of the economy. They are becoming a greater menace to the United States than any foreign threat. Having won the Cold War, the United States is defeating itself.
Posted by David E. Nye at 8:24 AM